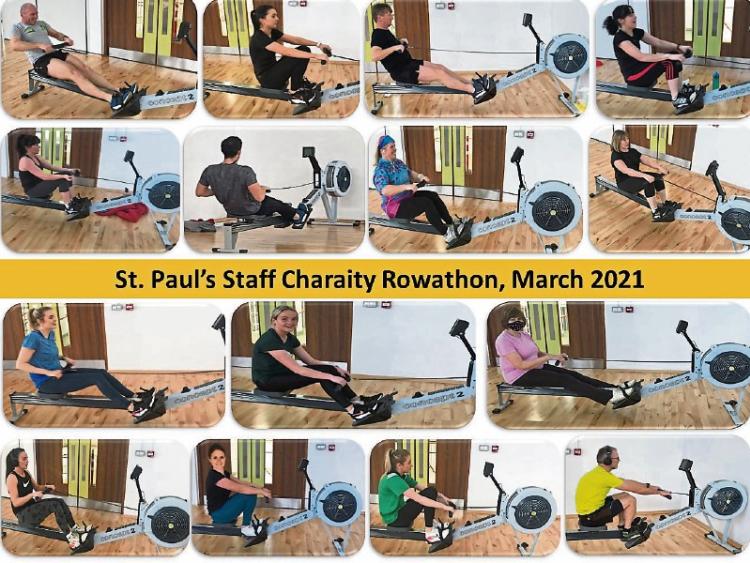 A LIMERICK school has raised a whopping €3,541 for charity by rowing over 200km as part of a fundraising initiative.

The staff of St Paul’s Secondary School in Dooradoyle took it upon themselves to raise money for two great causes in March 2021. The first cause was Milford Hospice, which holds a special place in the hearts of the staff,

“We’ve lost two or three staff to cancer and Milford Hospice had been very good to them. We wanted to give something back,” said principal John Tuohy.

Some of the money will also be going towards an expedition that past pupil Thomas Gomes is embarking on in the summer. Thomas, a current Trinity student studying conservation, will be going to Honduras in July where he will be helping in the conservation efforts of endangered species. St Paul’s aims to support past pupils with their projects, with similar fundraising events taking place in recent years.

It was St Paul’s teachers Shóna Francis and Anna Gloster who came up with the idea of the rowathon,

“We were trying to think of something that would garner team spirit without breaching Covid-19 guidelines,” explained Shóna, “the rowathon just seemed like the best option and we could have a laugh with it.”

The rowathon took place over the course of a week, with a member of staff always on the rowing machine.

Thirty members of staff took part, with the rowing ongoing from the beginning of the school day until it ended.

“It was tough going,” laughed Mr Tuohy, “but very enjoyable and I’m glad I got it done.”

The teachers, with their combined kilometres, managed to row the distance from Limerick to Dublin,

“The staff were delighted to work together and there was a great joy throughout the school as we were doing it,” Mr Tuohy added.

“I was overwhelmed by the amount of money,” explained Mr Tuohy.

St Paul’s is delighted with the amount of money raised and Mr Tuohy extends his thanks to everyone who supported the cause.

“For a cause like Milford, it’s great to give back, especially to a cause you know is worth it,” concluded Shóna.