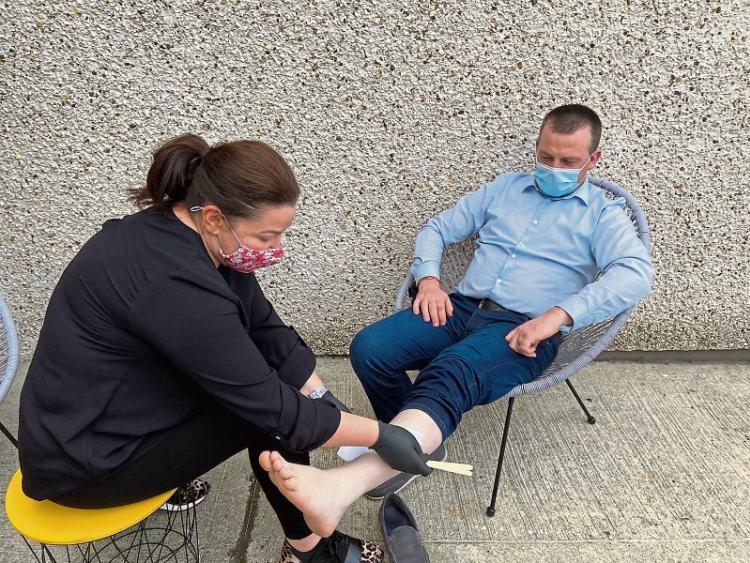 Lorraine and Brian Dunne thank all who supported the fundraiser

Greenkeeper Brian Dunne shouted something beginning with f when he got his legs waxed and it wasn’t fore!

He did it to support wife Lorraine, aged 42, who has got the all clear from colon cancer. The charity fundraiser went out live on Facebook so Brian’s screams could be heard in homes across County Limerick.

Lorraine, from Rathkeale, wanted to give something back to local cancer services after the superb care and treatment she received in UHL in 2020.

“Initially I thought about shaving my hair off. I didn’t lose my hair with the chemo. I thought I would raise awareness by shaving it off because most people don’t have a choice with cancer. I said it to Brian and he said, ‘Lorraine, you’ve been through enough’. I said, ‘Will you wax your legs?’ and he said, ‘No bother’. Now he didn’t know anything about waxing,” laughed Lorraine.

Perhaps it is best that the greenkeeper in Adare Manor Golf Club (old course) didn’t know what he was in for.

Beautician, Triona Doody Kennedy made him as smooth as a putting green.

“They both had masks on. Oh my God he felt it! You could hear him. I think he kicked the beautician once and I remember apologising. He is absolutely frozen in work now,” joked Lorraine.

The mum-of-two continued: “It went off really well for an online fundraiser. I had support from the whole town of Rathkeale and surrounding towns. Everyone pulled together – all the businesses gave me spot prizes. We would pull three strips of wax and then pull three raffle prizes.”

When all the donations were added up a total of €6,820 was collected for the Mid Western Cancer Foundation.

“People were so generous. From the bottom of my heart I want to thank the people of Rathkeale and surrounding areas for getting behind us,” said Lorraine, who also thanked Patrick Sheridan who collected €1,320 from the local Travelling community.

Lorraine said the money will help people who unfortunately find themselves in the same position as her.

“I was diagnosed with colon cancer in January 2020. I had a grade four tumour in my colon, I had radiotherapy, chemotherapy, robotic surgery with Colin Peirce. He took the cancer out then I had 20 rounds of chemo and got the all clear just before Christmas.

“I had fabulous treatment in UHL through the Covid. It was very scary at the start. They reassured me at every corner. They said, ‘We will gown up and you will get your treatment’. I couldn’t praise them enough. They are an awesome team in there,” said Lorraine, who thanked her own doctor, Sylvia Cooke and Mr Peirce, Mr Mazeem, Mr Korphanty and their respective teams in UHL and all the nurses and carers.