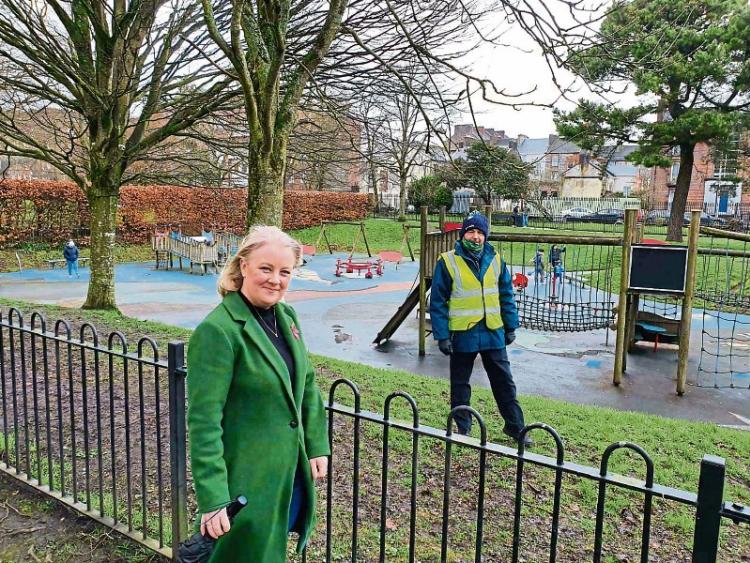 METROPOLITAN councillors have set aside €150,000 to do upgrade works to the People’s Park – including its playground.

The play area has been criticised for its “grubby” condition in recent times, and before it gets an upgrade, the council is expected to give the facility a deep clean.

This, metropolitan district leader Cllr Sarah Kiely says, is expected to take place in the next few weeks.

“The park is grubby and in poor condition. It hasn’t been upgraded in a long time. The 21 councillors at metropolitan level have approved upgrades to the People’s Park. It will be happening this year. Money came from every electoral area – the west, the north and the east,” she said.

The money is to be put up by councillors from their own general municipal allocation, a dedicated funding pot representing one per cent of the budget which can be used by members for special projects. Some €50,000 is being given from each of the districts.

Cllr Kiely, who represents the Limerick City East LEA, said: “It’s because it’s a park used by so many. It’s our duty and my duty as district leader to ensure that children who don’t have a front garden or back garden or safe place to play, that they do. That’s why all the councillors felt this was the right thing to do.”

The only thing delaying the start of work at the People’s Park is the fact the construction would be considered non-essential, and unable to commence under the latest lockdown.

However, the playground will be powerwashed in the next few weeks, Cllr Kiely added.

“I’ve been given a commitment the People’s Park playground will be cleaned,” she confirmed.

One mother, who wished to remain anonymous, travels in from Dooradoyle with her family each weekend, and decided to take a walk with her dog and spend some time in the playground with her toddler.

“You can only imagine my disappointment and my disgust after my walk, when I was greeted with a filthy, grimy and neglected playground. I frequent other playgrounds around Limerick at all times of year, however I have never seen the neglect I witnessed in the People’s Park. The ground was thick with grime, all the equipment was filthy. As a result it was dangerous and slippy. My child’s clothes and shoes were destroyed afterwards. I had to put everything into the wash when we arrived home – a first after a playground visit,” she said.

While she was able to leave after 30 minutes to go to a park nearer her home, she sympathises with those who do not have access to other play facilities.