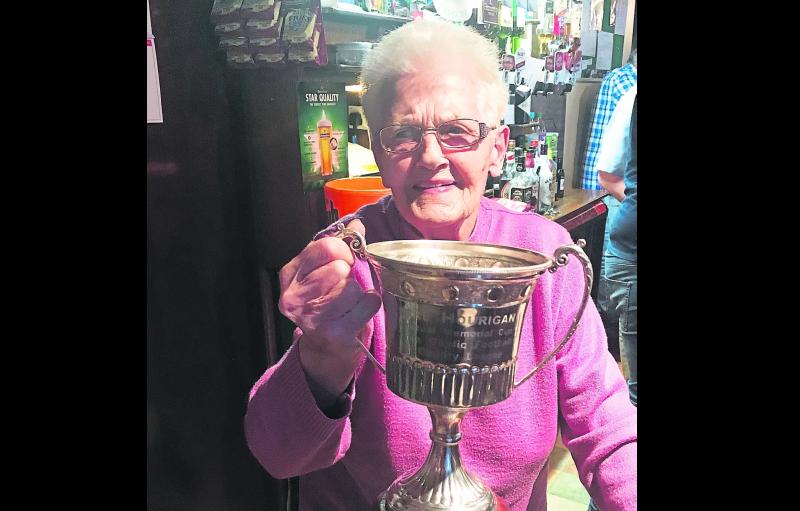 The late Molly Keane with the Máire Hourigan perpetual cup, in memory of her granddaughter, in the Cat's Cradle in 2017

THE LATE Molly Keane, of the Cat’s Cradle in Ballyneety, was an "extraordinary lady", said former TD and councillor, Eddie Wade.

Molly, in her 91st year, passed away peacefully on Tuesday after a short illness at University Hospital Limerick.

A private Requiem Mass, for family only, will take place on Friday at 12pm in St Patrick's Church, Knockea. Mass will be streamed live - to view it please click here.

Mr Wade said there has been a deep sense of sadness in the parish since news broke of her death.

"We’ll all miss her. Molly will be spoken about for a long time. She was very active up to the other day," said Mr Wade, who described Molly as "kind-hearted, a good parishioner and worked hard all her life".

Family meant everything to Molly. She and the late Tommy had five children - Helen, John, Pat, Mike and Stephen. Molly handed over the reins of the Cat’s Cradle to Pat in 1991. He learned from the best and the popular watering role celebrated its 100-year anniversary in 2016.

"She ran a very good pub. It was always a spotless pub, a good pint and a chat - history, hurling, football, you name it. She was an avid card player.

"The minute you went into the pub she would be eyeing you up to know were you a card player. She was an excellent card player - 45 was her game. She’d tell you if you made the same mistake eight years ago on a certain night,” said Mr Wade.

Indeed, her memory was unrivalled.

"I’m into local history about graves and people’s relations. If you got bogged down on what was a grandmother’s maiden name, for example, you’d go to Molly Keane and she would tell you her maiden name. I never met anybody better than her to trace relations of families," said Mr Wade, who describes Molly as an “extraordinary lady”.

"She was a farmer - she milked cows by hand; a nurse and a publican. She was an excellent neighbour as a nurse. She worked quietly for the older people when I was growing up years ago. She took care of them when doctors weren’t available. She was a very good judge of people who weren't well," said Mr Wade.

He describes Molly as a personal friend of his.

"When I was elected to Dail Eireann I had my headquarters in the Cat’s Cradle. They weren’t Fianna Fail, Fine Gael or Feenagh-Kilmeedy as I say about people but they really backed me,” said Cllr Wade.

Molly and the Keane family backed many people and clubs.

In a tribute on social media, South Liberties said: "As a club, we mourn the death of Molly Keane of the Cat’s Cradle. Our community has lost one of its greatest. We extend our deepest sympathies to the Keane/Hourigan/Kirby/Keogh families at this sad time."

Pike Rovers FC said: "Our deepest sympathies go out to the family of Molly Keane, late of the Cat’s Cradle, Ballyneety, following her recent passing. The kindness of the Keane family on the night of the bus crash in 1987 will never be forgotten. May she rest in peace."

The esteem Molly was held in will be reflected on Friday by the numbers standing in the wintry chill as her funeral cortege passes her residence en route to Cahernorry Cemetery at 1pm.