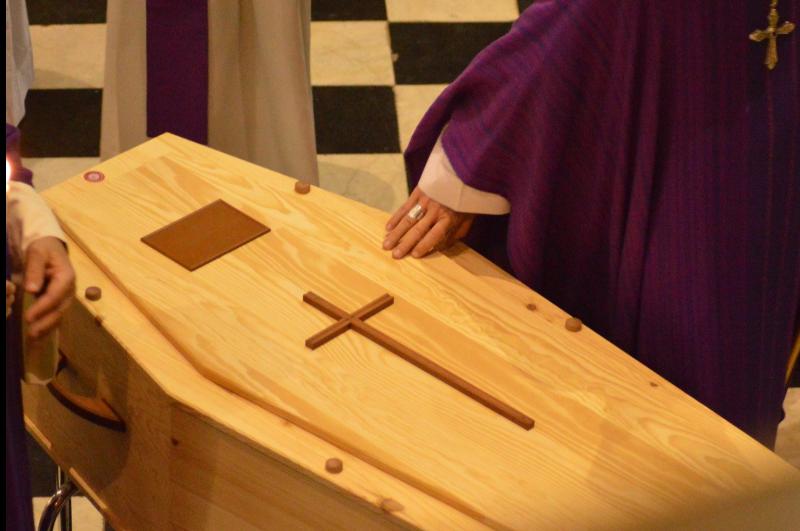 MINISTER Patrick O’Donovan is to write to government colleague Minister for Health Stephen Donnelly in relation to the vaccine roll-out for priests and undertakers.

“They are essential workers on the frontline and should be recognised as such,” said Minister O’Donovan, who isn’t advocating for anybody to be “queue jumped”.

He said he has been contacted by undertakers carrying out their duties during this pandemic.

“They have said to me that if they go down with Covid who is going to take up the slack for them. It is a big concern to me,” said Minister O’Donovan.

Undertakers and priests work hand in hand in laying our loved ones to rest. The Leader spoke to three elderly clergymen working in Limerick about their experiences and apprehensions of working under Covid.

“I’ve officiated at a number of Covid related funerals, albeit apprehensively. In addition, and not being aware, that not only the deceased having died with Covid, but also, family members who are in attendance at the funeral being infected. I was not informed of such until the 11th hour. I had to seek advice from my GP before celebrating the requiem Mass,” he told the Leader.

The priest said he has administered the sacraments to parishioners with Covid in their homes and in hospitals.

“It was only the other night I was called to the hospital to administer the sacraments. I had my temperature taken on arrival, put on full PPE gear and did what was necessary.

“When I got home. The minister for health was on the television. He said and I quote, “Anyone from receptionists to administrative staff, porters, doctors, nurses and anyone working in a hospital setting are considered frontline workers and should be treated as such re the vaccine’,” said the priest.

A different priest said: “I imagine most priests out of humility would not want to push the boat out there. I gather some priests connected with nursing homes / hospitals are getting the vaccine – I think HSE regard chaplains as part of the staff – but there is no public knowledge of this. It is interesting to note that the bishops are not pushing the government for their priests to get vaccinated!”

The third priest told the Leader he has officiated at sixty funerals to date which in an aging community might be expected.

“Close on half have been Covid related, so I find myself struggling to put together a liturgy and try to engage with the bereaved families and plan a dignified service

“Priests are slow to seek a special status. It is an integral part of our ministry to care for the sick and bereaved. Nevertheless, I  am vexed by a department that seems at best to barely acknowledge the input of priests in this regard,” he said.

Minister O’Donovan said undertakers and priests are two groups of people that haven’t up to now had their case articulated.

“There are no trade unions representing them. There is nobody going into government buildings advocating on behalf of undertakers and priests.

“I know there are a lot of people advocating for particular cohorts of workers. I am not looking for any preferential treatment or anything like that. I am merely saying that this should be looked at in the case of both of them. If we have a situation where they go down with this disease - who picks up the slack and that’s a big difficulty,” said Minister O’Donovan.

He points out that some undertakers and many priests are over a particular age and “would themselves be in the vulnerable category”.

“They are still fulfilling their duties and fulfilling their obligations to their communities which needs to be admired. While we all have our differences and everything else with the church and we will fall in and out with them, but when we come to our lowest and we are in our grieving processes they are always the people we turn to and they are always there. I’m talking about all denominations,” said Minister O’Donovan.

He concluded by saying he is really strong on the view that nobody needs to be bumped down the list.

“We have enough people talking about preferential treatment. That’s not what I am saying. What I am saying is I think we need to look at it. I think it is only right and proper that their concerns would be articulated and they would be on the radar. I don’t think to be fair, up to now they have been.”