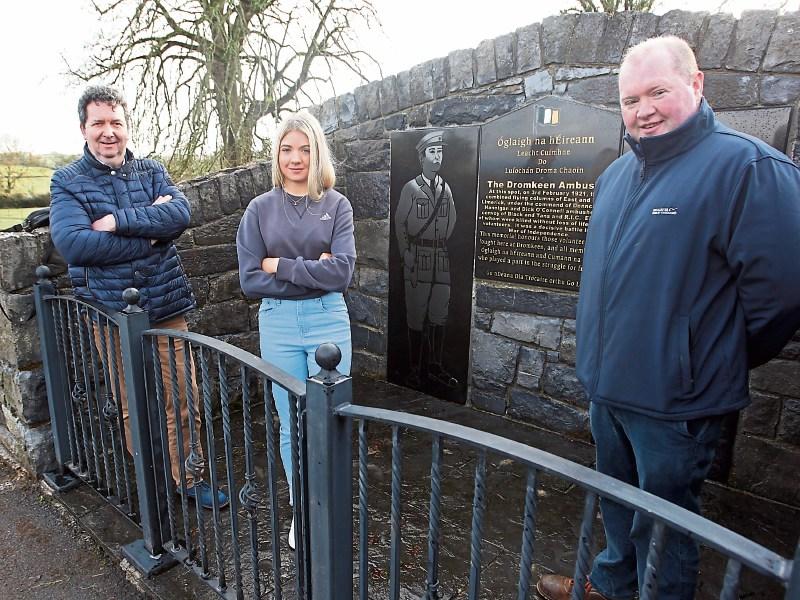 Matt Barry, great grandson of David Guerin, who was centrally involved in the ambush, with his daughter Aisling Barry, and historian Eddie O'Dea, at the Dromkeen Memorial | PICTURE: Brendan Gleeson

After the 1916 Easter Rising, sixteen of the Irish Republican leaders were executed and thousands of Irishmen were arrested and interned.

Trials had been held in secret and many Irish people were angered at their harsh treatment and their resistance against British rule grew. There was an escalation of emotion. General Tom Barry, who was a prominent Irish Republican Army (IRA) leader during the War of Independence, blamed the actions of his British opponents for the shift in Irish people’s attitudes and said, “We are now hard, cold and ruthless, as our enemy has been since hostilities began… they (the British) have gone down into the mire to destroy us and our nation, and down after them we had to go”.

In early 1920, Michael Collins ordered the IRA to target small groups of British troops in quick ambush attacks and to target RIC Barracks. He sent word to the East Limerick Brigade to “get these Limerick men into the fight”.

The Dromkeen Ambush took place on February 3, 1921. This ambush has great significance as it marked an escalation in the Volunteers campaign in the War of Independence (1919-1921). The ambush was the largest IRA ambush to occur outside of County Cork, and was one of the most effective nationally.

In January 1921, Richard O’Connell, commander of the Mid-Limerick Flying Column, along with Captains Sean Lynch and Morgan Portley began planning the ambush. The activities of the local RIC had been observed for several months. Local Volunteer John Purcell, Caherconlish, found that on the first Thursday of every month, two lorry loads of Black and Tans and RIC men left Pallasgreen barracks for Fedamore to pay the police in the barracks there. They seemed to use the same route and returned on the same day.

Richard O’Connell, one of the Volunteers at the ambush, said: “I went and had a look at this place at Dromkeen. We drove there one night… looked at the positions there, sized them up and decided it would be an ideal place for an ambush”.

There were 40-50 local IRA Volunteers under the command of Donnocha O’Hannigan. In The Dromkeen Ambush: Down Into the Mire in County Limerick, Joe Gannon wrote, “The ambush location was well selected. The lorries would be coming from the west. There was a severe right-hand turn at Dromkeen House, where the road turned east for several hundred yards in a straight line, to an intersection that split to the north and south”.

The plan was to block both of these roads. On the morning of the ambush, Donnocha O’Hannigan put Volunteers David Guerin, Sean Stapleton and Maurice Meade, at the corner to be the lookouts for the convoy. At around 2.30pm, the lookouts near De- Burghs house “Dromkeen” let them know the lorries were coming.

The plan was to let the lead lorry reach the barricade before they opened fire, expecting them to be widely spaced. The lorries were closer than expected and the men lining the road near Dromkeen House opened fire first at the second lorry when it was near to prevent it getting beyond them.

The first lorry was driven by Constable Cox, District Inspector Sanson sat beside him and there were three in the back. The lead lorry turned left and on seeing the barricade, tried to turn right and in doing so hit a ditch and turned the lorry over. The three men in the back of the lorry were shot straight away. Cox and Sanson were in civilian clothes and got out of the lorry without being hit.

Richard O’Connell in his witness statement said: "Because they were in civilian clothes the IRA hesitated about opening fire, thus allowing the two men to run down the road and over a fence into a field before the IRA realised who they were".

According to Joe Gannon, “All the Volunteer participants said the firing only went on for a few minutes, with the RIC and Black and Tans able to mount very little resistance”.

Eleven policemen were killed, nine at the scene and two who tried to escape, a Black and Tan named Samuel Adams and RIC Constable Patrick Foody, who were later executed. Only one IRA man – Liam Hayes from Ballinlough, Kilteely was wounded. There were no IRA fatalities.

A dilemma faced the Volunteers regarding what to do with the two who tried to escape. The British had announced that Volunteers captured with arms would be executed and they had already carried out this new policy. The Volunteers had sent a request to GHQ in Dublin looking for instruction on what to do in a similar situation and had received no reply. They voted and the result was 3-2 for execution.

In his witness statement, Volunteer Maurice Meade said: “The reason for shooting these Tans after they had surrendered was that O'Hannigan had an order from GHQ in Dublin that we were to shoot all Tans and peelers who fell into our hands".

Just a few months earlier, six Black and Tans were wounded in the Kildorrery Ambush however the wounded were not harmed, and a nurse treated them. This shows how much more vicious the war had become.

Following the ambush, the enormity of what had happened dawned on people and families in the locality feared the worst. Their fears were added to by threats from the British forces that they would burn every house in the area. They burned ten homes and farms. They removed furniture from one house and burned that first, then burned the house. They also posted a notice warning people against keeping their hands in their pockets, or being out of their homes after 7pm.

Public opinion at the time was that if District Inspector Sanson had been killed, reprisals would have been more severe. He used his influence to restrain the force under his command, as a result no one was shot.

When I interviewed my aunt Phyl Guerin, Kilteely, granddaughter of David Guerin, she said the family recounted stories that David Guerin’s house was due to be burned by the Black and Tans.

“When they came to the door, there was a picture hanging in the hallway of a British Naval officer, who was married to one of the family and the RIC Sergeant would have known this fact. They left and did no damage to the house.”

The Dromkeen Ambush was well planned and organised and carried out with brilliant military precision. It was a huge success for the IRA and a major morale boost for the Limerick Volunteers. While the people in the community lived in fear of British reprisals, they rallied together and their resistance against British rule and the fight for independence grew stronger. I believe that ambushes carried out during this time would not have been a success without the support of the local people.

In an interview given by Volunteer Sean McNamara of Clare, he recalls some of the lengths people went to, to show their support for the IRA: “There should be some kind of a plaque placed in every house that housed us, minded us and took care of us, people came out of their beds when we were three or four days out on a mountain, they gave us their own beds, people really won the war because they stuck by us, they had the good sense to keep their mouths shut.”

The number of ambushes carried out during the War of Independence grew and they were an important tactic of the IRA. They were able to inflict casualties without suffering too much in return. During this time, there was an increased number of attacks on RIC barracks and as a result, the British Government decided to close all smaller RIC stations.

Many of these events, especially those during the last few months of the War, played a major part in bringing about the truce on July 11, 1921, which ended the War of Independence and led to the Treaty being signed on December 6, 1921.

On February 8, 2009, a memorial to the ambush was unveiled in Dromkeen and was attended by up to 2,000 people. As we approach the centenary of the ambush, we can reflect that this was a time when there was oppression of the people by British rule and ordinary civilians were coming under increased attack. Communities felt there was a necessity to take action. Michael Collins said that the ambush at Dromkeen “put the fear of hell into England and that’s the sort of fight that will teach them sense”.

The Dromkeen Ambush can be viewed as a vital step in the struggle to gain a free and independent country.

This article was published in the most recent issue of the Grean before Christmas.