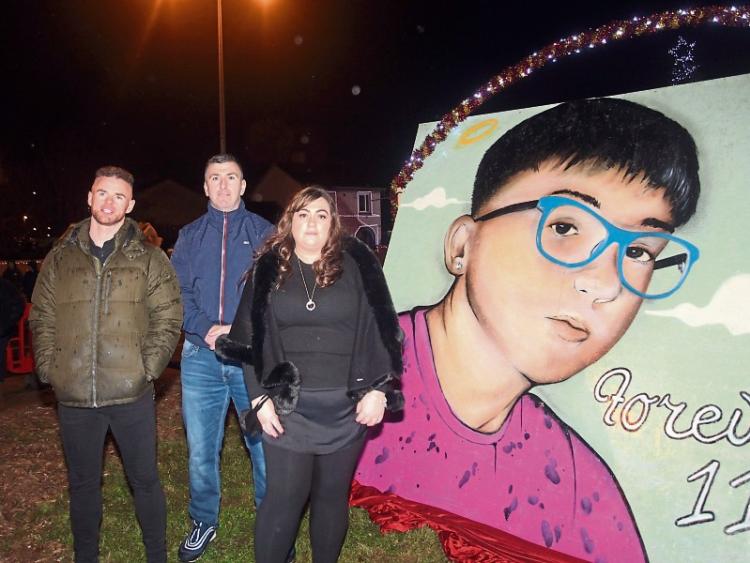 THERE were emotional scenes at the weekend as a mural was unveiled in memory of a young boy who sadly died last year.

Designed by artists Lukasz Milawski and Joe Kennedy, it was unveiled as part of a winter wonderland event in Delmege Park, Moyross which was organised by community activist Jamie Daly and his family.

“It’s great, it’s really nice. This is a lovely thing from the community for us. It just shows how well loved Brooklyn was in Limerick. He was an amazing young boy, he was loved, he touched everyone,” said his father Wayne as he unveiled the mural with Sonya Alymer, Brooklyn’s mother.

“I’m really proud they did this for us,” he added.

Graffiti artists Lukasz and Joe spent four weeks of their own spare time designing the mural of Brooklyn, as well as other murals, depicting the Polar Express train, which was the theme of the wonderland in the middle of the neighbourhood.

Lukasz said he hopes the family find it special.

”I put lots of work into it, plenty of detail in it. I think it shows happiness, a time when Brooklyn was happy,” said the artist.

Joe added: “I think the family will be very happy and delighted to see spray paint artists doing a mural for them. Especially guys from a graffiti background like us.”

It wasn’t the first time Joe had linked up with Jamie for an event like this.

“Last year I did an event with Jamie, and he got onto me again. We have called this year’s event Project Believe.

“We want kids to believe in themselves, and believe in what they can achieve when they come together for an event like we did,” he said.

“We want kids to believe and use their skills,” he added.​

At the unveiling of the mural in Moyross were local school principal Tiernan O’Neill, City TD Maurice Quinlivan, plus local councillors Sharon Benson and Frankie Daly.

Addressing the crowd, Jamie said: “Tonight we are going to make a memory which will never leave. Something which will always be part of Moyross, Delmege and Brooklyn’s family.

“Brooklyn was a young lad. I knew what he was about – he believed. This just shows as communities, we are not alone,” he added.

Also at Saturday’s event, Santa Claus paid a visit, while selection boxes were given out to local youngsters, as the days ticked down towards Christmas Day.