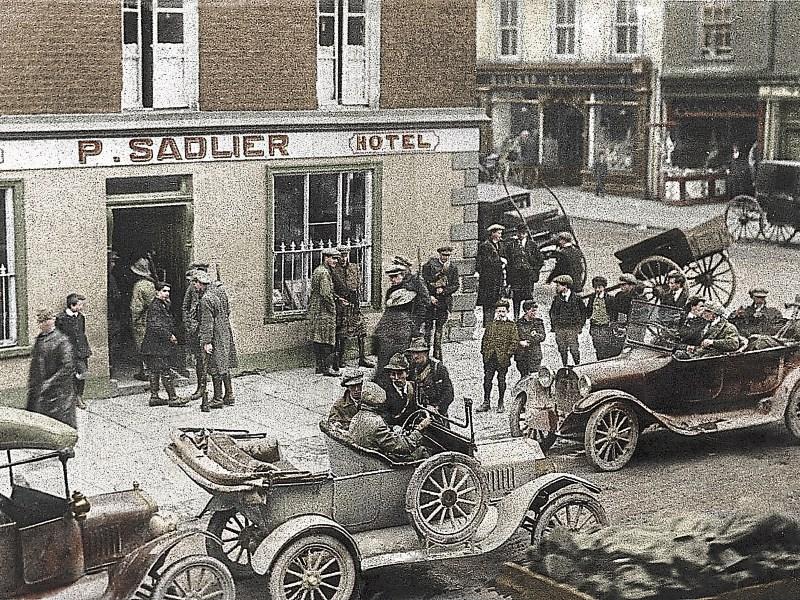 Limerick city under Republican control in July 1922; one of many black and white photographs colourised by John O'Byrne

IT was a mere seven years, the period of the Irish Revolution from 1916 to 1923. However, these years constitute the elemental founding stage of the Irish State.

A new book - An Illustrated History of the Irish Revolution 1916-1923 - captures these times like never before. The author, Michael Barry, specially commissioned over 130 black and white photographs to be colourised by John O'Byrne.

“These help bring the events of the Irish Revolution to life. In addition, there are around 600 other images, old photographs, documents, periodicals and specially prepared maps. There is much new information and a lot of the photographs have never been published before,” said Michael.

The book will be of interest to people from every county. There is much for us from Limerick to ponder. 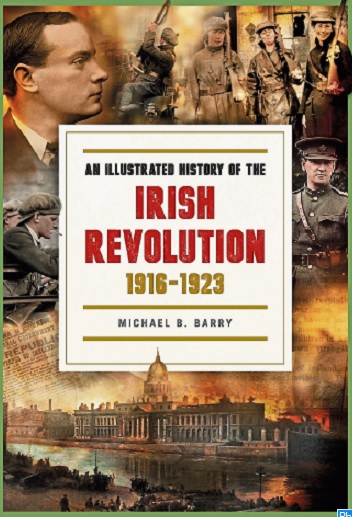 Mr Barry says that with martial law declared after the Easter Rising, General Maxwell of the British Army (Commander in Chief, Ireland) was now effectively ruler of Ireland.

“On May 6, 1916, he wrote to Bishop O’Dwyer of Limerick asking him to restrain two nationalist priests. This rebounded spectacularly; the bishop's reply to Maxwell attracted widespread support. It referred to recent events as being 'cruel and oppressive', and went on: “You took care that no plea for mercy should interpose on behalf of the poor young fellows who surrendered to you in Dublin. Personally, I regard your action with horror, and I believe that it has outraged the conscience of the country',” said Mr Barry.

A month earlier, Volunteer, Robert Byrne, detained for gun possession in Limerick, was rescued on April 6 by the IRA. An RIC guard was killed. Byrne died of his wounds and thousands attended his funeral.

“Panicked, the British declared Limerick a Special Military Area. In protest, the local Trades Council called a general strike for April 13. A committee, or ‘Soviet’ (workers’ council) as it became known, managed the city in a peaceful and skilful manner, while the military were boycotted. The strike ended two weeks later. In response to a shortage of money, the strikers printed their own notes,” said Mr Barry.

The historian said there were many actions by the IRA across Limerick.

“The flying columns of the East and Mid-Limerick Brigades, IRA (under Donncha O’Hannigan) ambushed an RIC patrol at Dromkeen, as it returned to Pallasgreen on February 3, 1921. It was a bloody encounter for the Crown forces, resulting in 11 dead. The first tender came under heavy fire and crashed into a wall. The second was fired on from the cemetery and the opposite side of the road. Eight RIC died immediately. An impromptu court martial was held in situ and the resulting vote was to execute the remaining Black and Tans,” said Mr Barry.

Early in the morning of March 7, 1921, men in civilian dress burst into the homes of the Limerick Mayor, Seoirse Clancy, and his predecessor, Michael O’Callaghan, and shot them dead. The assassins had collars turned up, caps over faces and wore goggles. Suspicion immediately fell on the Auxiliaries.

On Sunday, May 15 1921, District Inspector Major Biggs was driving with some companions in the direction of Newport. Biggs had won a reputation for brutal behaviour and the IRA were determined to get him. As the party drove down a dip at a small bridge at Coolboreen, the local IRA opened up. Biggs was killed, as was Winifrid Barrington from a prominent Limerick family.

Mr Barry said Limerick proved one of the first flash points on the road to the Civil War.

“In early March 1922, on hearing that Clare pro-Treaty units under Commandant-General Michael Brennan were moving to take over barracks in Limerick, the local IRA (with assistance from the Tipperary and Cork IRA), moved to pre-empt this. While King John's Castle remained in GHQ hands, the anti-Treaty IRA were in occupation of all the other Limerick strong points.

“Limerick controlled approaches to the south-west and the north-west. As Civil War began at the end of June 1922, Republican forces were entrenched in most strongholds in the city. Pro-Treaty Comdt-General Michael Brennan agreed a truce on July 4 with Liam Lynch (Chief of Staff of the anti-Treaty IRA). This bought time for the pro-Treaty side, allowing troops and arms to be sent to Limerick. The Limerick truce ended on July 11, when the Provisional Government forces, on the pretext that a soldier had been shot, spread out along the barricaded streets of the city and opened fire on the Ordnance Barracks.

“As fighting continued in Limerick, General Eoin O’Duffy left Dublin with troops, weapons, an armoured car and an 18-pounder. He reached Killaloe and fought his way into Limerick on July 19, 1922. After shelling in the city, Republicans withdrew from the New Barracks and set it on fire. An 18-pounder shelled Strand Barracks, and on July 20 it was stormed. Next came Castle Barracks. In face of the onslaught, Liam Lynch sent an order to the anti-Treaty forces to abandon their now-untenable positions in Limerick city and burn them,” said Mr Barry.

In the last week of July, after consolidating his hold on Limerick, General O’Duffy sent troops to the Kilmallock-Bruree area (close to the border with anti-Treaty Cork), where the Republicans had regrouped after withdrawing from the city. There was also an advance on Adare on August 4. The town was taken that evening by pro-Treaty troops.

“Pro-Treaty troops headed out of Limerick to the 'South-Western Front', as the newspapers dubbed it. There was fierce fighting across a wide front in the Kilmallock-Bruree area. Eventually Kilmallock was taken on the morning of August 5. Most of the defenders had withdrawn. The Kerry IRA Brigades had previously left to face the pro-Treaty forces that landed at Fenit on August 2,” said Mr Barry, who spent over a decade researching this period.

“I decided to draw together the strands of this formative era into one volume and endeavoured to present the story in a rich visual manner. I collaborated with the master colouriser, John O’Byrne, based in Rathangan, Co. Kildare, who painstakingly worked to ‘Colourise the Irish Revolution’’. The 130 or so colourised images make the book particularly special,” said Mr Barry.

An Illustrated History of the Irish Revolution 1916-1923 is available from Books.ie and all good bookshops.