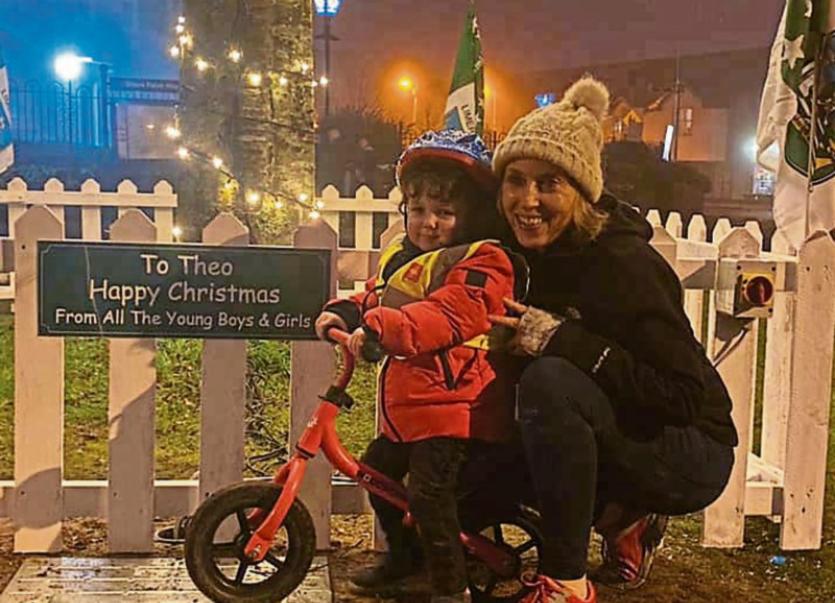 Eleanor Murnane and her son Theo, who turned on the lights on the spectacular ‘Tree for Theo’ in Murroe

LIMERICK was asked to Team up for Theo and the result has been terrific!

Eleanor Murnane, Murroe, has got the best early Christmas present imaginable as the target of €375,000 to bring her son for a cancer trial in New York has been reached.

And the news gets even better as Theo, aged three, received the clear scans required to get on the clinical trial at Memorial Sloan Kettering Hospital Cancer Centre in New York this Monday.

Eleanor said she was “speechless” that the €375,000 target has been reached in just two and a half weeks.

“From the bottom of my heart I want to thank everybody who has donated to the GoFundMe page, held fundraisers and supported us in any way they have. I’m just blown away,” said Eleanor.

The number of fundraisers run has been phenomenal. There has been a GAA jersey raffle; a beautiful ‘Tree for Theo’ in Murroe; farmers collecting batteries; Xbox giveaway; children donating Christmas lights; schools and creche collections; winter swimming; GAA club events and that is just scratching the surface.

If anybody deserves it, it is Theo. Only three and a half-years-old, he has had a tumour removed; gone through numerous rounds of chemotherapy; a double stem cell transplant; fourteen rounds of radiotherapy; six rounds of immunotherapy and serious infections.

Eleanor said she has come scarily close to losing him, but Theo has defied all odds and battled through it. She thinks Theo’s story really resonated with people because “you don't expect a child to have cancer” and the time of year coming up to Christmas.

The single parent said the trial in New York will help prevent the cancer re-occurring and greatly improve Theo’s chances of survival.

“Theo deserves a long, healthy life free from pain and fear. I have to do everything in my power to make sure he gets this,” said Eleanor.

She has done more than that for her son and now Eleanor can start planning for their visit to New York early in the New Year.

She stressed that any money remaining in the fund that isn't used for Theo’s treatment will be ring-fenced and donated to a child who needs the same sad opportunity as her son.

And again, Eleanor wished to thank everyone who has teamed up for Theo.