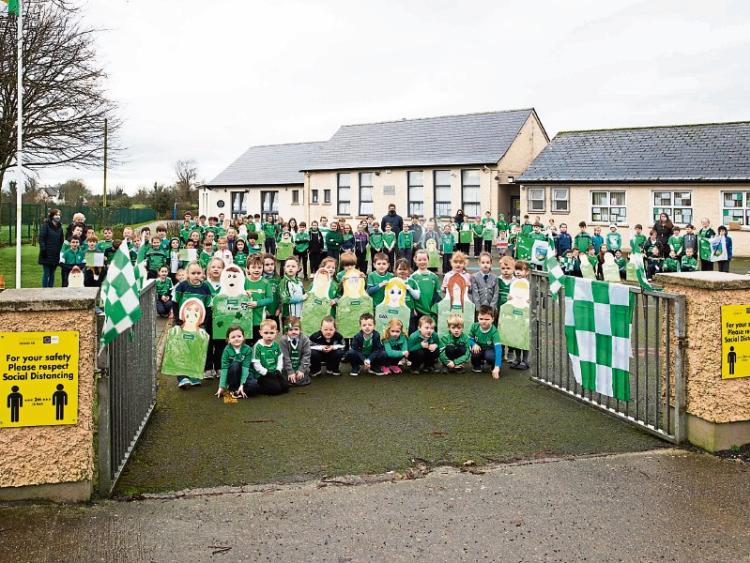 Fans in the Stands: Caherelly NS pupils, pictured this Tuesday, with some of their 80 boards that will be displayed in Croke Park on Sunday | PICTURE: Keith Wiseman

NO FANS will be allowed into Croke Park on Sunday but pupils of Caherelly NS have the next best thing!

They are one of thirty lucky primary schools chosen for Centra’s Fans in the Stands competition. They have created self-portraits on boards that will be placed in the stands of Croke Park on All-Ireland hurling final day.

It will be particularly poignant for Caherelly NS as their much-loved principal – Fionnuala Allen – passed away in October. Despite being a proud Kerry woman, Fionnuala was a big follower of the Limerick hurlers and was in Croke Park for the final in 2018.

Accompanying her that day was the now acting principal, Niamh McGuinness.

“Fionnuala was an avid Limerick supporter. She will be smiling down on us on Sunday. She would be very proud of her former pupils showcasing their artistic talent and support for Limerick on All-Ireland final day,” said Niamh, whose daughter Moya was the lucky cup bearer in 2018. She was picked the previous April not knowing that Limerick would go all the way to the final!

There was another Caherelly connection that famous day as Orla Ryan played in the primary school games at half-time during the clash between Limerick and Galway.

Niamh thanked parent Joanne Browne for nominating the school for Fans in the Stands.

“We are going to have 80 boards in Croke Park. They are being collected on Tuesday. The pupils have been very busy drawing their own faces and painting the Limerick jersey on,” said Niamh, who – like all the school – is looking forward to seeing Caherelly’s presence in Croke Park on TV.

Centra said the initiative has been designed to ensure that participating inter-county teams still feel their supporters’ presence from inside the stadium.