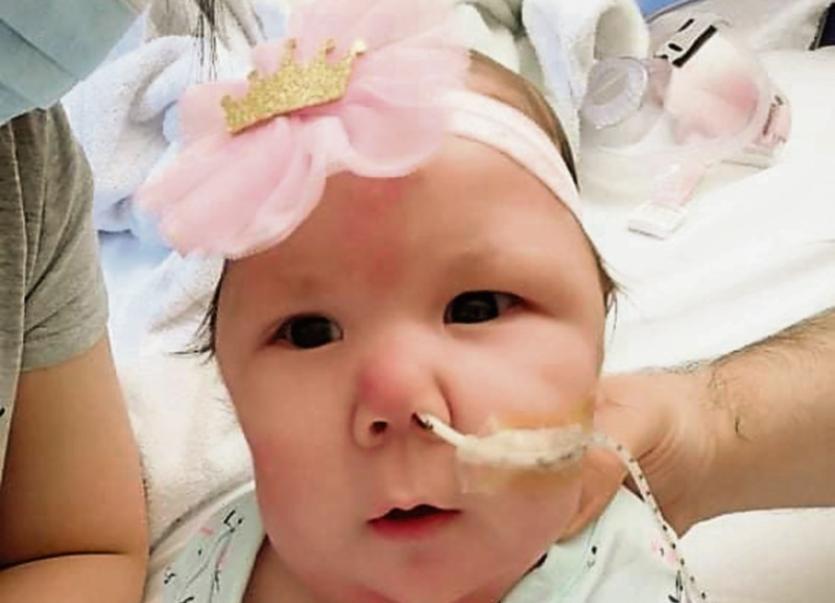 Qi Qi Handanovic is her mum and dad’s ‘little warrior’

A GoFundMe page has been started to support a couple living in Limerick and their baby girl Qi Qi, who was born with a very rare condition.

It’s so rare that there are only 50 babies in the world with the condition like Qi Qi and she is the only one in Ireland. Her dad, Tomislav Handanovic, a Croatian national who has been living in Limerick for six years, said it is called Kagami–Ogata syndrome. It is a rare imprinting disorder that affects growth, swallowing, causes respiratory issues and developmental delay.

His wife, Summer, who is from Malaysia, gave birth to their first child on July 2. Tomislav said Qi Qi has been in hospital – the Coombe and Crumlin – ever since.

The couple are hoping to be able to bring Qi Qi home to Limerick for Christmas.

“That is our hope. We are waiting at the moment to find out. There is a room in a specialised unit in University Hospital Limerick. She gets very bad chest infections,” said Tomislav, who calls Qi Qi his “little warrior”.

The proud father said when Summer was pregnant they were told their baby would have a two per cent chance for survival after birth. And after Qi Qi was born doctors didn’t hold out much hope but she has continued to fight.

Now the family are looking forward to their first Christmas together. Monies raised from the GoFundMe page will help them cover the expenses of staying in Dublin, upgrade their apartment in the city and basically look after their little girl as best as they possibly can.

To date almost €8,000 has been raised. They have got great support from Supermac’s organisation and staff in Limerick and around the country.

Tomislav and Summer met and fell in love in the Supermac’s in Singland. However, Summer has had to give up her job to look after Qi Qi.

“Supermac’s have been so good to us. They are the greatest support I could get. It would be very difficult without Pat and Una McDonagh to maintain ourselves and especially all the expenses that we have towards staying in Dublin. And for things that we need to upgrade our apartment for Qi Qi’s quality of life. Her future is really unknown.

“I'm really grateful to Pat and Una McDonagh. They have been very good to me. I'm seven months not working and Pat is supporting me. Without that, I don't know what I would do,” said Tomislav, who also asks for people to pray for his little girl.