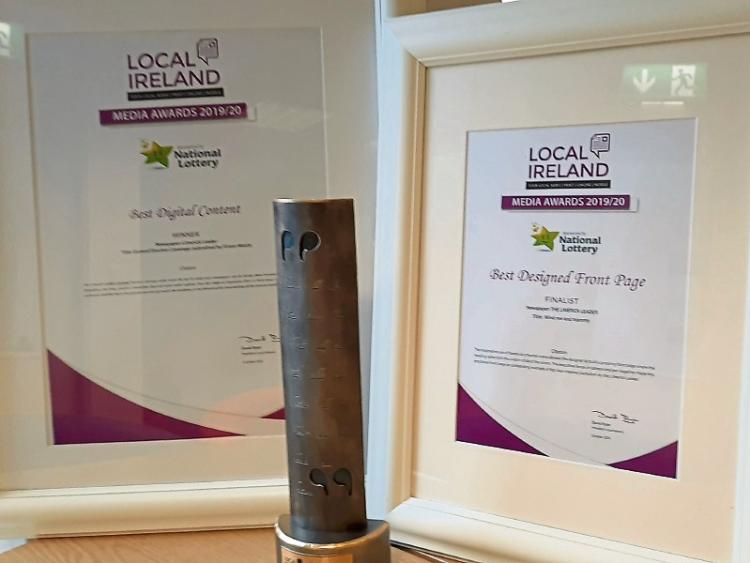 THE Limerick Leader is celebrating on the double this week following news that the paper and website were award winners at the recent Local Ireland Media awards 2019/2020.

Now in their fifth year, the awards were ‘handed out’ remotely this year, with no gala event for those who were lucky enough to be nominated.

The first award for the team was the ‘Best Designed Front Page’ title.

The Limerick Leader team, of News Editor Áine Fitzgerald and Design and Layout's Charles Prashaw were winners of the award for their July 3, 2019 front page of the 'The Leader’ newspaper, which portrayed a wreath of flowers left at the location of Kevin Sheehy's murder.

The words of the judging panel says it all for us. The picture was taken by Michael Cowhey.

“The imaginative use of flowers at a murder scene allowed the designer to build a gripping front page where the heading came from the unborn child of the victim. The evocative forces of camera and pen together made this emotional front page an outstanding example of top class creative journalism by the Limerick Leader”

The second award claimed by the Leader team was for best Digital Content.

“The Limerick Leader's General Election coverage really raised the bar for what local newspapers can do during these dramatic weekends,” the judging panel admitted.

“Alongside a live blog, graphics, interactive map and social media updates, they also made an impressive effort to think about the different audiences, whether that is the general user who just wants the headlines, or the diehard politics fans wanting all the intricate details and tallies, they added.

The Limerick Leader team worked tirelessly on the General Election coverage, culminating in the count which took at Limerick Racecourse, Patrickswell. The award is fitting recognition for their ground breaking work.

While the Limerick Leader's online coverage of February's General Election count attracted hundreds of thousands of page views, the success of limerickleader.ie is not confined to one weekend.

More than 200,000 people log onto the website every week generating in the region of one million page views.

The Limerick Leader is also continuing to grow its social media presence.

The Limerick Leader, much like us all in the 'new normal' are adapting to continue to bring you the news from around Limerick and beyond.

Times may have changed from 1889, when the first Limerick Leader hit the streets, but time has also changed since March too and with the fluid nature of modern news, modern technologies and the ever increasing need for the truth, the Limerick Leader continues to provide just that for the people of Limerick.