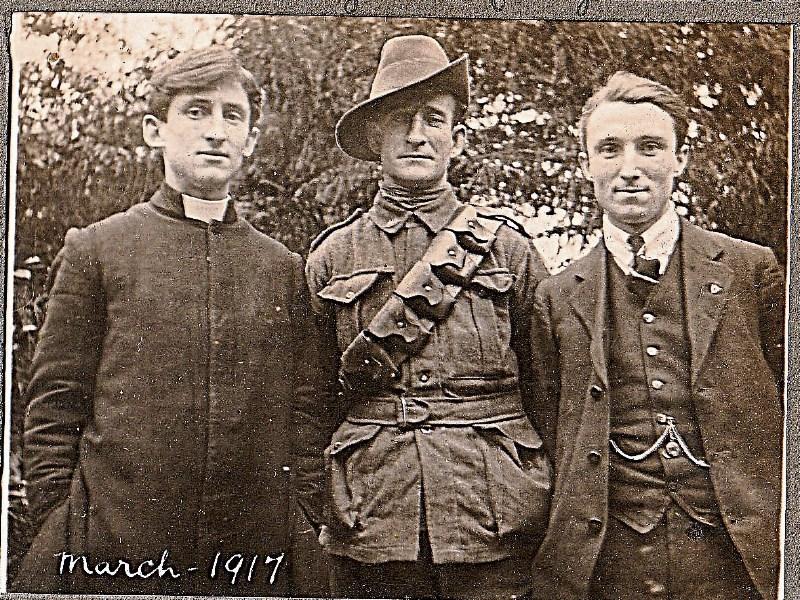 Three Scanlan brothers from Galbally: Fr Peter, who took and kept many photos, with Jimmy and Michael

“May God be merciful to the noble souls of all those who died for Ireland.”

These are the words of Patrick Ryan, a pupil of the late Michael Scanlan, paid in tribute to his former teacher at the unveiling of a plaque in his honour 50 years ago. Mr Scanlan is one of those “noble souls”.

Just over 100 years ago Mr Scanlan, a native of Galbally, was killed by the British Forces.

At the plaque unveiling in 1970, the great Limerick historian Mannix Joyce said: “Strongly nationalistic in outlook, he joined the Volunteers, was arrested and conveyed to Limerick and on October 27, 1920, he made a dash for freedom, was pursued by his captors and was mortally wounded in Thomas Street”.

Dr Joyce said great men and heroic men proved their worth that year when the test came, and among the bravest was Michael Scanlan of Galbally. He rose to be Commandant of the East Limerick Brigade as well as being a school teacher in Kilmallock.

Dr Joyce said men of the Galtee Mountain country were never ones willingly to bow to foreign domination.

“The will to be free was in their blood. Michael Scanlan brought that love of freedom with him when he came to Kilmallock.

“And he brought with him too, the love of all things Irish, the love of our language, our songs, our culture, our traditions; all of the vital things that go to making Ireland a nation.”

In 1970, Dr Joyce said thanks to the sacrifices of men like Michael Scanlan, the tricolour can fly in freedom in 26 of our 32 counties.

“And we can gather here to honour Michael Scanlan, and to honour, through him, all the dead who died for Ireland, without fear of interference from any truculent foreign soldiery,” said Dr Joyce.

Unfortunately gatherings in 2020 weren’t possible due to Covid-19. However, his nephew Tim Ryan said they laid a wreath in Thomas Street on October 27 and in Galbally. Kilmallock Historical Society laid one at the entrance to the new school.

“We are very proud of Mick and especially me as I live next door to his original home in Galbally. Mick was one of the main organisers of the Kilmallock barracks attack in 1920,” said Mr Ryan, who thanked Kilmallock Historical Society and especially Eamon O’Riordan.

He said there is a book in the Scanlan family. One of Michael’s brothers was Jimmy Scanlan.

“He was one of the Galbally five who took part in the rescue of Sean Hogan in Knocklong on May 13, 1919. He went on to the train unarmed and himself and Ned O’Brien were both wounded and had to escape to America after it. I am very proud of my ancestors and my village,” said Tim. As he should be.