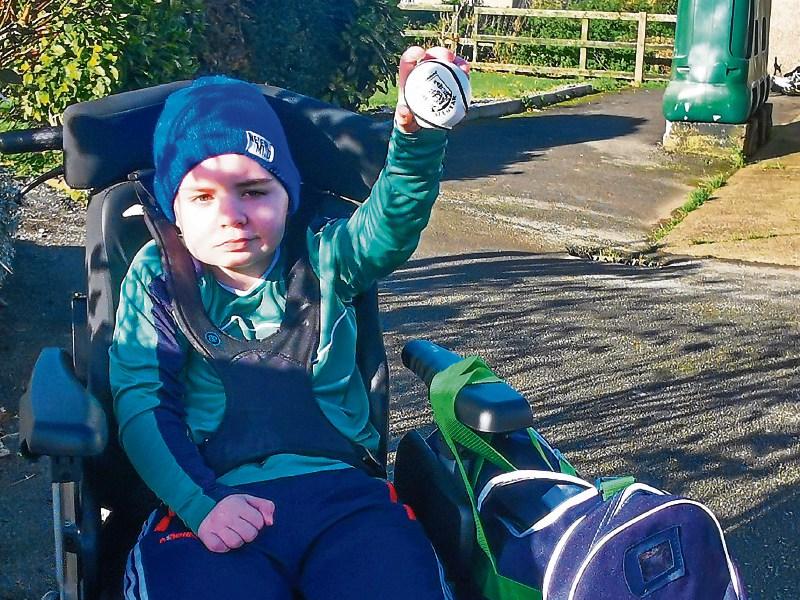 High ball: Dáithí with his presents from the Limerick hurlers

The weekend visit was well ahead of schedule following a devastating road collision while riding his bike last April.

Jack O’Shea, of the Rise4Dáithí fundraising committee, said Dáithí continues to make great progress and parents Antoinette and Liam were “able to fulfil what seemed like a dream by bringing their son home to Cush, Martinstown”.

“Sheer will and determination on the part of our local warrior played a major part in this becoming a reality. The outpouring of goodwill and generosity played no small part in this reality also,” said Jack.

In a nice coincidence the Limerick hurlers and management had given a kit bag to Jack for Dáithi. Inside was a signed jersey and card by all the players; Declan Hannon’s socks and togs; sliothars and grips from Aaron Gillane Sports; GAA books; mugs; water bottles and more.

Jack said one of the highlights of the weekend was the presentation of the kit bag full of goodies to Dáithí, aged 10.

“Being one of Limerick’s biggest fans, and with the match against Clare, it was the perfect gift to ignite the excitement once again. A massive thank you to everyone at Limerick GAA for this amazing gift for Dáithí,” said Jack.

He said it was such a special weekend for Dáithí and his family that began on Friday evening.

“Most of us take for granted having our families always close to us. It is only when we come so close to losing that which we hold closest, that we realise how fragile life can be and we are forced to reevaluate what truly matters. It has been a huge success and Dáithí spent a few nights in his own home surrounded by all his family.

“To look into Dáithí’s eyes tells you all you need to know about what this means to him. That roguish smile, that wit, that unmistakable devilment was in full flow all weekend.

“Spending time with his brothers, using technology for browsing, gaming and all the things a young boy his age would be doing, even the resistance to being told its bed time, all gave a sense of normality to a family that is emerging from a nightmare with hope and future in sight,” said Jack.

He and a team of volunteers got together in July to set up the Rise4Dáithí committee. Their goals were simple - raise funds to cover as much of the cost as possible for the alterations needed to the family home to accommodate their new reality, and purchase suitable transport for their weekly travels to and from Dún Laoghaire for the long road of rehab ahead. They set a very ambitious target of €100,000.

“We hoped that by Christmas we would have enough raised to enable Dáithí to be able to come home if his recovery allowed that. Nothing could have prepared us for the next few months. The amount of hard work and dedication of the committee was phenomenal but was driven by the tsunami of messages of goodwill, encouragement, and generosity shown by people from all over the country and outside of it.

“The local and not so local community came out at every opportunity to help and donate to the various events we held and made every one of the events a huge success. Many local groups that Dáithí has been involved with such as the Comhaltas, chess, and drama groups have been such great support for the family.

“Words cannot express enough the thanks and appreciation from every member of the committee and the Lawless family. Not only did we reach our target by the end of October but in fact, we have raised an incredible €120,000 and we continue to see donations being made and small localised and individual events being run and money donated. A massive thank you to each and every one that helped us to reach this. In a time of such uncertainty and anxiousness, the human nature in people has been a huge ray of light,” said Jack.

Time flew from Friday to Sunday. There was a tinge of sadness as Dáithí made his way back up to Temple Street with Bumbleance, who have also been fantastic supporters,

“But now that he has a taste of home once again, we don’t doubt that his determination will be exponentially boosted and that horizon for a permanent move home is getting ever so much closer. Thank you to all once again who has helped make this a reality and the family is eternally grateful,” said Jack.