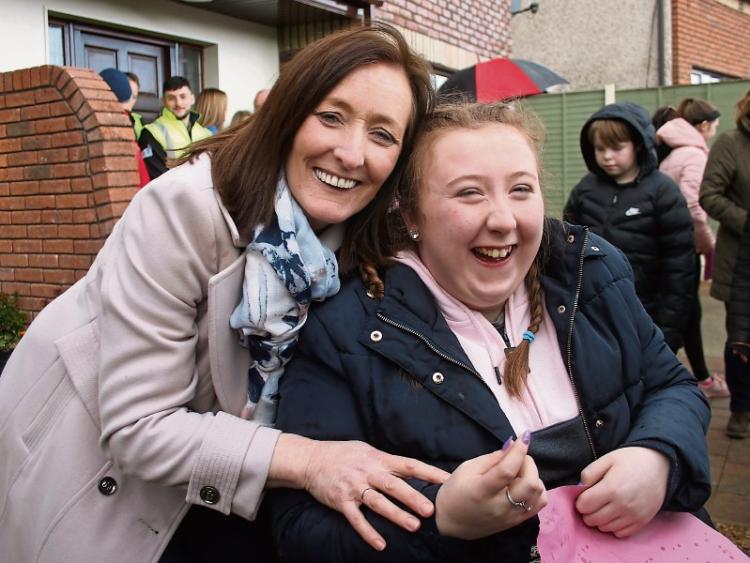 Proud: Sharon Mulcahy pictured with her daughter Amy after a huge team turned up to transform their home in Annacotty.

LIMERICK has once again revealed its fighting spirit to the wider world thanks to teenager Amy Mulcahy who has inspired the nation on national television.

The Castletroy College student, 14, survived against all the odds after being trapped under a row-boat last year.

And she captured the nation’s hearts on Sunday night when she was featured on RTÉ show DIY SOS, where an army of volunteers transformed her family's home in Annacotty into a more accessible space for the teenager.

Now she has her dream home, Amy is hoping to achieve another goal in life, and be part of what will be a very different ceremony to light up the city’s festive illuminations.

City East Fianna Fail councillor Catherine Slattery, a friend of the family, has been in contact with Mayor Michael Collins to ensure the inspirational teen is included in the ceremony, and it’s understood council bosses are examining ways to make sure she is featured in what is planned.

“This young lady has been through a lot in the last year, and has shown so much determination and courage after her tragic accident. Last night, I was messaging her aunt and she told me that each year at the turning on of the lights, Amy would say she’d love to do that some day,” said Cllr Slattery who added that it would be lovely to include Amy in this year's celebrations.

Mayor Collins said he was “touched” to see the episode of DIY SOS, which aired on RTÉ on Sunday last.

“I was very aware of her accident, and it was great to see such camaraderie and special attention given in changing her and her family's lives. It’s great to see the heart and community spirit shown by Limerick people and I’m delighted Amy was a recipient of it,” said the first citizen, who confirmed Cllr Slattery had been in contact.

Sharon described the reaction to the RTÉ show as “amazing”.

“The feedback we’ve been getting is just unbelievable, and overwhelming.

“I cannot even answer my texts and calls, there are so many of them,” she said.

Sharon added it would be a “huge honour” for her daughter to join in the turning-on ceremony – which will be different this year due to Covid-19.

Sharon paid tribute to her daughter’s school, Castletroy College for the help they have given her since she returned to the classroom.