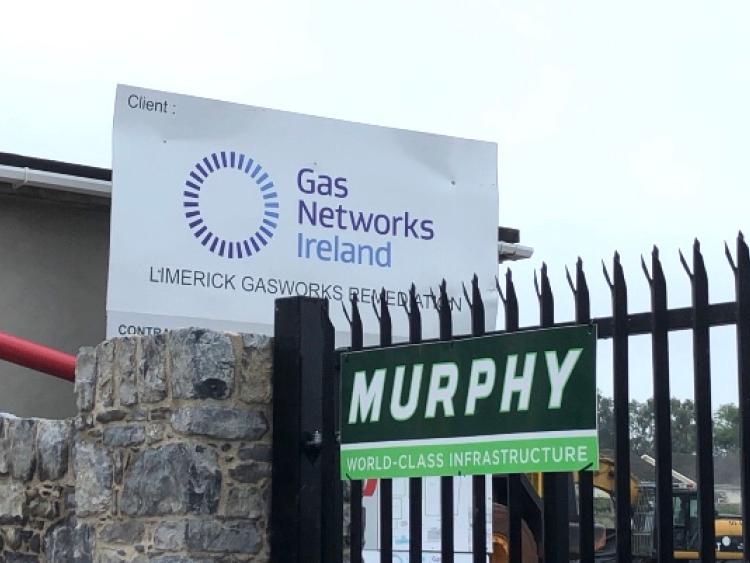 GARDAI were called to the scene of a protest at the Gas Networks Ireland site after an environmental activist blocked its entrance in a bid to prevent the transport of coal tar substances off-site.

Sinead Jackson, from Annacotty, stood at the entrance of the Dock Road site all day Monday and Tuesday morning, until members of Henry Street gardai were forced to intervene.

The sole protester said she was “standing strong” in solidarity with residents and businesses who have lodged complaints against the company over the emission of odours in recent weeks.

Gas Networks Ireland is currently in the completion phase of “soil stabilisation” on three acres on O’Curry Street and the Dock Road, in a bid to make the site ready for commercial development.

As part of the multi-million euro project, 80,000 litres of coal tar is to be taken off-site in tanks and will be shipped to Finland via the Limerick Docks, a spokesperson for Gas Networks Ireland confirmed.

This contaminated material is a common by-product of historical gas making, which had occurred at this site from the 1850s until the 1970s.

The coal tar, which was stored in tanks, remained on site which is why Gas Networks Ireland was remediating the soil.

Ms Jackson told the Leader she “refused to move” until the gardai arrived, adding: “It’s very disappointing that it has to get to the point that I have to be arrested.”

A spokesperson for the gardai said that members attended the scene at 8.30am on Tuesday.

WATCH: Picketer in bid to stop transport of substances at Gas Networks site in Limerick

“One protestor was blocking an entrance and was asked to move by gardai. They complied immediately, no further action.”

The Environmental Protection Agency [EPA] has received 77 complaints in relation to these works, many of which are in relation to the emission of odours, which have affected a number of residents and businesses in the area.

However, Gas Networks Ireland has moved to reassure residents that they are putting “safety at the heart of everything we do” and have previously said that the odours are “not toxic”.

“We monitor air quality on the site and in the surrounding streets on a regular basis to ensure the safety of the public, our neighbours to the site, our workers and all visitors to the area. This screening has not detected any air quality issues that would have occupational or a public health impact.”

A spokesperson for the EPA said that the site is still under investigation, and that they are preparing an updated status report on the works.

“During EPA site visits, we have confirmed that all of the excavation, mixing and relaying activities that are carried out as part of the remediation works have the potential to generate hydrocarbon odours on the site. These odours can cause offsite impacts if they are conducted in unfavourable weather conditions.

“In cases where we have determined that works are impacting residents and businesses around the site, we have instructed the licensee to cease activities that were causing these impacts. We will continue to do so as and when necessary to prevent offsite impact,” a report on July 31 stated.