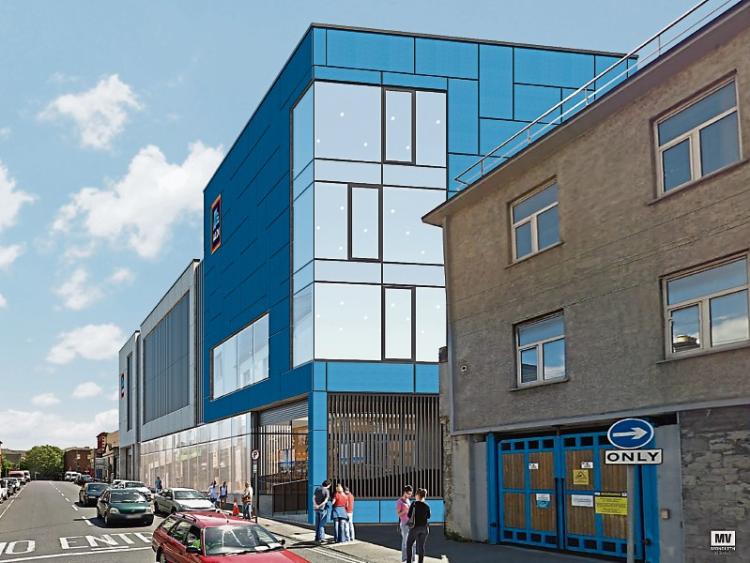 LIMERICK City and County Council has told Aldi to “omit” customer parking from its plan for a new store in Roches Street.

The discount German retailer was planning to provide 85 car parking spaces at its new store proposed beside the eir exchange.

But in a letter seeking further information on  ​the project, the council said, given its location in the heart of the city, car parking should be left out of the plan.

The local authority also urged Aldi to come up with a number of other uses for the area in Roches Street, and improve on the facade proposed for its new multi-million euro store.

The ball is now in Aldi’s court, with the firm now having six months to respond to the council’s concerns at its blueprint, which would see 100 construction jobs and 25 permanent roles created.

Currently, the firm is seeking to build a four-storey store at the former eir exchange car park as part of a €160m investment programme for the region, with 1,250 square metres of space.

But there have been a number of submissions and objections to the proposals, including from local TD Willie O’Dea, An Taisce Limerick and a number of small traders who would be impacted by the entry of a discount supermarket into the centre.

The land where the store is being built has been vacant since 1986, when the final remnants of the Matterson’s Bacon Factory were removed.

In a submission, An Taisce Limerick argued while they were in favour of a supermarket, they feel what is presented at present represents an “environmentally and socially regressive use” of a historic site.

“Given the size and location of the site it presents, in design terms, a primitive and regressive proposal reminiscent of what prevailed in recession-ravaged 1980s Limerick. The proposal to give over most of the site – three of its four storeys – to car parking is entirely unacceptable and would constitute an appalling waste of a prime city centre spot,” the heritage group argued.

They expressed concern at the “prioritising” of private motor vehicles over pedestrians and cyclists.

In a detailed submission, a coalition of smaller traders suggested the building of Aldi would "seriously impact on the vitality and vibrancy of the city centre retail area and would constitute an unsustainable form of development which would be principally dependent on private car based transport and on serving a wider catchment than the wider area.”

A discount supermarket, they also argued, would also “compromise” the potential of Roches Street for other, smaller trades.

Mr O’Dea also wrote to the planning authority saying he is supporting the objections which have been lodged.