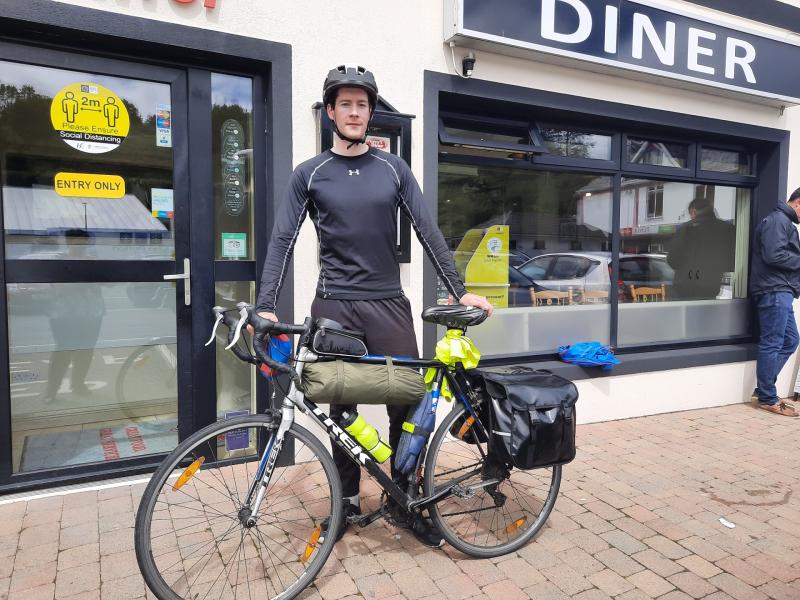 Saoirse Mac Cárthaigh stops off in Donegal Town as part of his 2,600km cycle

Going the extra mile for something you believe in is one thing. Taking on a 2,600 km solo cycle is taking things to a whole other level.

But that is exactly what Donegal man and Mary Immaculate College PhD student Saoirse Mac Cárthaigh is currently undertaking, raising funds and awareness for the national autism charity AsIAm.

The Limerick based student is cycling the Wild Atlantic Way from the Old Head of Kinsale to Malin Head.

On arrival in Donegal Town this week having been on the road since July 6, Mr Mac Cárthaigh took time to talk to our sister paper Donegal Post / DonegalLive.ie

So what drove him to take on this incredible journey?

“I am going into my final year of training for a Doctorate in Educational Psychology,” he said. “I have a lot of experience working with children with autism and have worked in autism diagnostic services for four months.

“When I did my Masters Degree it was on the topic of attitudes to autism.

“From my experience, I think AsIAm is a particularly good autism charity because it is less focused on changing autism and more focused on societal attitudes to autism.”

Among the many aspects of the charity’s work that has impressed Mr Mac Cárthaigh is its award system for universities. Having an autism-friendly university environment goes a long way towards helping people with autism to reach their potential and become full and active members of society.

“The award is given out to universities that have staff training, quiet places, autism employment programmes and things like that in place,” said Mr Mac Cárthaigh. “That is an example of some of the great work AsIAm does. They also go out into schools and workplaces and give talks. I am delighted to have raised around €3,000 so far. That will ensure a lot of talks that will help raise awareness.”

July 2020 has been one of the wettest on record, so perhaps not an ideal time to have been cycling and camping on Ireland’s Atlantic coast.

Mr Mac Cárthaigh says that if there was a low point, it was sleeping in a wet sleeping bag.

“One day of rain is fine,” he said. “When you have two or three wet days in a row, your stuff is all wet and you can’t get it dry.

“But I had so many high points that it was worth it.”

Among the high points Mr Mac Cárthaigh mentions are the Dingle Peninsula, the Ring of Kerry, the Burren and the Cliffs of Moher in Clare. He was also struck by the sheer remoteness of parts of the coast.

“Mayo in particular was real wilderness in the most beautiful way,” he said. “I have travelled a lot internationally but not so much in Ireland. This was a wonderful way to see the Wild Atlantic Way on a budget.”

Other high points were the many people who supported him along the way and who helped him exceed his target of €2,600.

With Donegal’s extensive coastline between Mr Mac Cárthaigh and his final destination, there is still a long way to go. But crossing into Donegal, he felt that he was on the home straight.

And after a well-earned rest, it will be a return to study and to a career dedicated to supporting children with autism and their families.

Anyone who would like to support Mr Mac Cárthaigh or follow his incredible journey can find links to donate via his social media:
facebook.com/saoirse.maccarthaigh

Donations can also be made via idonate