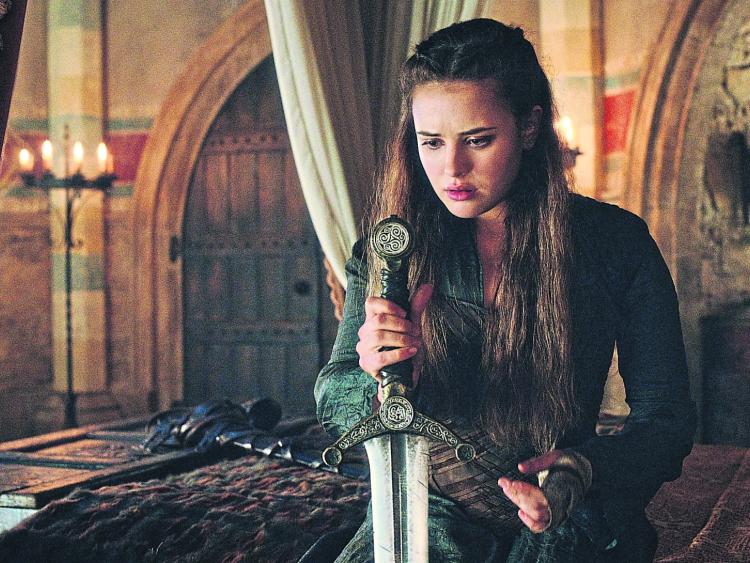 But Katherine Langford, 24, excitedly threw herself into three weeks’ intense training for the role, while also coming up with her character’s dialect.

The Australian star, known for another big Netflix series, 13 Reasons Why, also worked with a trainer on the weekends when they had finished filming, they called it “prehab”, to make sure she didn’t get injured.

It’s all part of telling the story of a “true heroine”, which was something Langford felt was very “timely” and was partly what drew her to the script of Cursed, created by Tom Wheeler and Frank Miller.

Based on the book of the same name (written by Wheeler and illustrated by Miller), the 10-part series is a reimagining of the tale of King Arthur, and explores themes such as the obliteration of the natural world, religious zeal and oppression, senseless war and finding the courage to lead in the face of the impossible.

The coming-of-age story is told through the eyes of Nimue, a powerful warrior witch who has a mysterious gift and is the young woman who would become the Lady of the Lake.

Following the death of her mother, she finds an unexpected partner in Arthur, a humble mercenary, in a quest to find Merlin and deliver an ancient sword, and also save her people.

“It’s interesting, because when you think of the Arthurian legend, you think of Arthur and Merlin and the Knights of the Roundtable but we very seldom dive into the female characters,” notes Perth-born Langford, who has also starred in films Love, Simon and Knives Out.

“Particularly with the Lady of the Lake, who’s such an iconic figure within that legend, we know very little to nothing about her.

“So, when I was taking on this role, the first thing I did was to try and research little bits about her.”

American-Australian actor Devon Terrell (he was born in California but grew up in Perth) takes on the role of Arthur, and agrees playing such a legendary character comes with a lot of pressure.

“I love that kind of pressure because it just means I have to do my research, and I work physically and mentally and emotionally with this character and I can find the truth of who they are,” says the 27-year-old star, best known for playing a young Barack Obama in the 2016 biographical film Barry.

“Being a person of colour playing the role is extremely exciting because, growing up, I didn’t see myself a lot in fantasy.

“I wanted to be a part of it so much; I love Lord Of The Rings, I love Game Of Thrones, I love Harry Potter, and I didn’t see a lot of myself represented, especially as a lead character.”

“I think it’s so exciting because this show is going to inspire so many young people, of different genders and different colour, that are going to say, ‘I am not ‘the other’; this is what the world looks like’.”

What was his first reaction when he read the script?

“Actually, I was helping a friend out with an audition and they happened to be auditioning for this, and I told my agent and they got in touch and they said, ‘Oh my God, we’d love him to audition’,” he recalls.

“It was an amazingly quick process.

“My first reaction was, ‘I know I can do this, I know I can play this, if they take the chance’.

“And it just so happened that in their heads they were like, this is the right person for the role’.

“The thing I always worry about diversity is, is it a question of, ‘Oh, do we wanna make this a diverse show?’

“I just think, in the times we are living now, it shouldn’t be that we pat ourselves on the back for being diverse.”

As for the challenges of the role, amiable Terrell confides: “It was a physical, mental and emotional journey the whole way.

“I think the fear is, ‘Am I predicting for the audience too much? Am I showing too much of a leadership role?

“Am I being too weak in this moment?’ And I think that was always a challenge, balancing him.

“Because in moments, it’s like, ‘When do I give charge to Nimue, and when is she allowing me to be the leader?’

“Because this is very much the story of the Lady of the Lake.”

Langford points out how sometimes, “girls or women are told that it’s masculine to be strong, which isn’t true at all”.

Which is why she felt Nimue was an important character to represent on-screen; the story recognises “all the obstacles which are specific to women” that she has to overcome on her journey, but also shows how she is a “strong and capable hero”.

“I think the most important thing with this is showing that she is capable, and not undermining her by her falling over for no reason, which sounds kinda crazy when you just say it like that, but sometimes scripts you read, if there’s a girl and a boy, the girl stumbles and the boy has to help her up,” chatty Langford elaborates candidly.

“I don’t remember if there were any moments like that within this script, but if there were, I felt really comfortable to go to Tom and just say, ‘Hey, I don’t quite understand why she does this?’ And he would go, ‘Oh yeah, that makes no sense at all, just do what makes sense’, which is for her to run, and not fall over anything, do you know what I mean?”