Out in the Open: 'Why stories of scandal failed to shock Dan Paddy Andy' - John B Keane 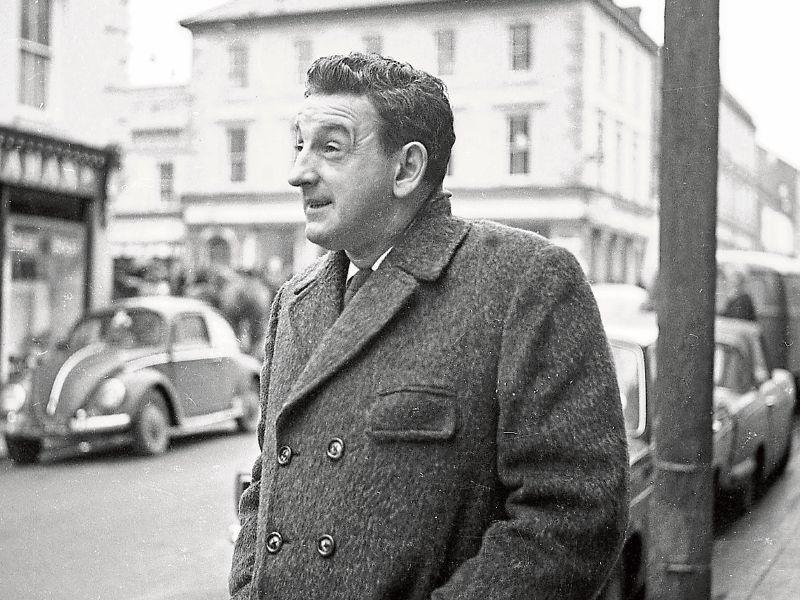 AS we have already said in these columns, the Renagown dance hall of Dan Paddy Andy O’Sullivan was under severe pressure from all sides from the day it was built.

However the first of the death blows was not struck until the foundation was dug for a relatively large dance hall at Headley’s Bridge on the Dublin to Killarney road, half way between Abbeyfeale and Castleisland.

The name given to this new edifice was simply Headley’s Bridge Hall. This once popular venue has been closed for many years now, gone the way of the Palladium, the

Renagown hall and Dan Connie’s Loft, gone the way of many a crossroads dance floor and roadside platform.

Slowly but surely after the war Ireland’s economic situation began to improve. This improvement was painfully gradual but it built up year and year though the fifties and into the sixties when it blossomed into full flower.

Motor cars became plentiful and on Sunday nights boys and girly were forsaking the small town and parish halls and venturing further afield to the bigger towns and even the cities.

One by one, the old halls, many little more than sheds, disappeared. They had, however played an important role in the life of the countryside when there was no transport only the occasional bicycle or the pony and trap.

Small as it was an isolated as it was, the hall of Renagown, therefore, deserves to be remembered as does it late owner. Let us not forget about Dan’s reputation as a matchmaker for the moment and examine him as a member of his community It could be said that Dan did more for his own people during the thirties and forties than any other man of his time.

Paddy Kavanagh, the poet, would have appreciated Dan. He might have written a poem to him had they met. Dan stood like a rock against anything and everything which might stifle the right of people to enjoy themselves, the right to court, to love to marry, to dance and sing their way out of the dark ages of the Economic War.

Most of the priests and many of the itinerant missioners of the time would sympathise with Dan but far too many would not. But we should remember that when times are black for the ordinary people they are blacker still for their priests and before we hasten to condemn the more outspoken and ancient of these rude clerics we must not forget that they were only carrying out offers and were ill prepared for frontline duty when dire emergencies arose.

Looking back it could be argued that most of the strictures of those impoverished times were necessary if human dignity was to be preserved.

The Renagown hall was somewhere to go and a palace outside of which older people could congregate for the want of something better to do. There was no television and radios were still a luxury and would remain so until the end of the war. On the credit side there was a good deal of bothantoireacht and there were many established “rambling houses” where a lonely man was made welcome and given a place by the fire.

Women rambled much less and if a woman lived alone or was looking after an aged parent it was unlikely that she would have the courage or neck to face up to the door of a rambling house although her welcome would be assured. Still for the most part women did nor ramble.

For younger people rambling was not the answer. Young men and women longed for the sight of each other. Winter nights were lonely and although the homes were happy with card games and stories you could not fulfil a dream of young love from the corner of a kitchen table. You cannot keep a young man from thinking of girls no more than you can stop the sap from quickening in the buds of Spring.

No man knew this better than Dan Paddy and I often suspect he needed the hall at Renagown as much as patrons did. His lifestyle shows that while he was happily married to Kat O'Brien there was also a hunger in him for life and excitement as well as travel. He never waited for things to happen. There was a need for a hall in Renagown so he went and built it. There was need for a matchmaker in the Stacks Mountains so he made matchmaking his profession.

He was a good mane too to make up a difference between neighbours. He never waited to be sent for. He always took the initiative himself saying there was only one place apart from hell into which he would not venture, that being the dock in the court of law. He was quick to sense bad blood between neighbours and was quick off his mark to prevent a quarrel from developing into something worse. He was shocked for instance, by the murder of Maurice Moore and it wasn’t easy to shock Dan Paddy Andy.

News of illicit pregnancies, elopements, infidelities, love affairs and what-have-you never drew a word of condemnation out of him. At the very most his comment would consist of a shake of the head. He was too well aware of the absurdity of human folly to be put down by it. He never had the hard word when news of some sexual transgression came his way but he was truly aghast when word reached him that Maurice Power had been murdered. Dan was as familiar with Raemore as he was with Lyreacrompane. His mother was Geaney from Raemore. In time the tragedy took a back seat in Raemore and Lyreacrompane but it was always to the forefront with Dan. A few weeks after the murder I called to see him. He shook his head.

“This is one business that cannot be fixed or settled” he said solemnly. “There is no shake hands at the end of this. The water in the goggles will curdle before this is blown away.”

He seemed to be truly ashamed of the fact that the crime had taken place in his own bailiwick. It was his love of all living things that led to his reaction in this instance. Dan had never to be reminded that life was God’s greatest gift. It was the crowning belief of his life.

“Manamdee”, Dan would say, “isn’t a row a noble thing. A row is the only vent the body has. The couple that goes a long time without a row has seen the back of love but for all that the seed of one row should not be saved to grow another. Let rows be natural and no harm will be done.”

When he directed himself towards philosophy he was at his most revealing and amusing. Once he got going on this task you could shoot him any kind of a question and be certain of a worthwhile answer.

“What do you think of love at first sight, Dan ?”

“Would you buy a mare by the looks of her or would you trot her first ? Would you boil a spud before buying a butt.”

I doubt if Dan had ever heard of the expression “city slickers” but when advising young girls at their first dance he might have had the same slickers in mind.

“Most townies are alright but never give your heart to the buck with the hair oil, the pin and the fountain pen, because that is the very man that will give you the crack of a fist if you don’t have something on the pan for him when the pubs close at night.”

“Manamdee, there’s nothing wrong with drink unless you make it your diet.”

There was a cousin of mine one time who went to Killarney to see Dan Mahony wrestling “The Yank” Charlie Strack in the racecourse there. That would be 1938 the year after the Eucharistic Congress.

“He fell to drinking whiskey and held at it for three days. The night of the third day he was carried into the Mental Home. He was roaring like Horan’s bull and he made out to the Civic Guards that he was after being attacked by wild deer that came down from the mountains in the middle of the night. When he scolded the deer they changed into greyhounds. Of course they were greyhounds all the time but that’s three days of whiskey for you.

“He gave six months indoors in Killarney and he stuck to the mediums of porter after he was released.”

This article by the late and great John B Keane was first published in the Limerick Leader on May 7, 1977.