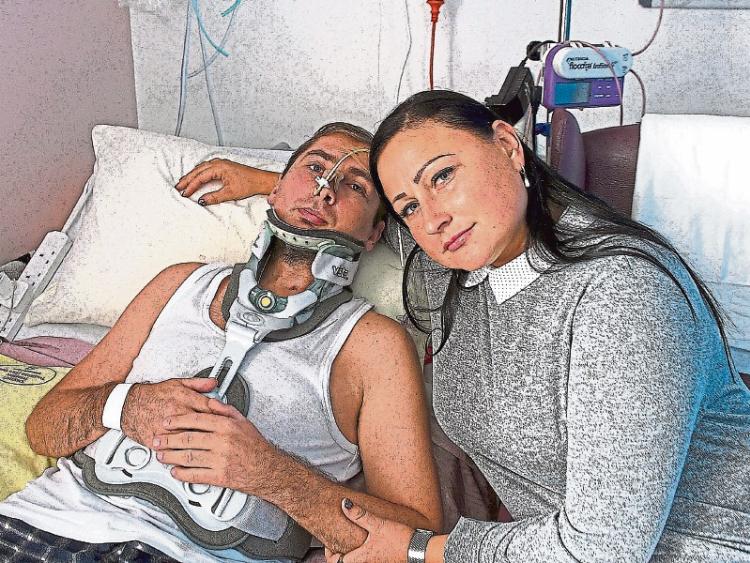 Tomas Mikalajunas with his wife Gintare Mikalajuniene at UHL following the shooting incident near Shanagolden in 2016 - PICTURE: Michael Cowhey

A LITHUANIAN man who was seriously injured when he was shot in the head by a garda almost four years ago has avoided a prison sentence for his role in several military-style burglaries.

Tomas Mikalajunas, 40, who has an address at Cluain Arra, Gortboy, Newcastle West spent several months in hospital after he was injured when a firearm was accidentally discharged following a high-speed pursuit between Ardagh and Shanagolden in the early hours of June 28, 2016.

Limerick Circuit Court was told he was part of an international crime gang which had carried out a series of “skillful and impressive” burglaries at commercial premises.

Mr Mikalajunas has pleaded guilty to a burglary charge relating to the theft of luxury clothing, with a retail value of around €240,000, from Isobel, Main Street, Adare in the early hours of June 21, 2016.

He has also pleaded guilty to burglary and criminal damage charges relating to a break-in at a pharmacy in Kinsale, County Cork in the early hours of January 13, 2016.

Detective Garda Michael Brosnan said €50,000 worth of designer cosmetics and perfumes were stolen from the pharmacy.

“They were highly sophisticated, (they were) in and out in six minutes,” he told Lily Buckley BL, instructed by state solicitor Aidan Judge.

Judge Tom O’Donnell was told the cosmetics were subsequently shipped to Lithuania where they were sold in local markets.

Detective Garda Brosnan said a major investigation was carried out and that gardai liaised with with several other agencies including Europol and Interpol.

Mr Mikalajunas, he said, flew back to Lithuania a number of days after the Kinsale incident and returned to Ireland on June 16, 2016 – five days before the burglary in Adare.

While the high-end dresses, which had cost €80,000 to purchase, were recovered at a logistics company in Cavan, they were not resalable and Kay Mulcair  – the owner of Isobel – later told gardai she did not have insurance.

John O’Sullivan BL, instructed by solicitor Michael O’Donnell, said his client who was arrested and charged after he was discharged from hospital had made “the most forthright of admissions” when questioned by gardai.

He said the case against the married father-of-two was circumstantial and Detective Garda Brosnan agreed there was no forensic or video evidence placing Mr Mikalajunas inside either premises.

“We don’t have any forensic evidence. His admissions are of critical importance,” he submitted adding that any trial would have taken up considerable court time given the number of witnesses.

Detailed medical reports were submitted and Mr O’Sullivan confirmed that separate civil proceedings relating to the shooting have commenced.

Imposing sentence on Tuesday, Judge O’Donnell accepted that Mr Mikalajunas was “not the brains” behind the military-style operation.

He said the premeditated nature of the burglaries was an aggravating factor as were the financial losses incurred by both businesses.

The judge accepted the defendant sustained serious “life-changing” injuries as a result of being shot and he directed that the various medical reports be pinned to the court file in the event that they are ever required.

Given the nature of the injures, he said an immediate custodial sentence was not appropriate.

He imposed a five and-a-half year sentence, suspending it entirely.

Another man - Aurimas Petraska - was previously jailed for his role in the burglaries.