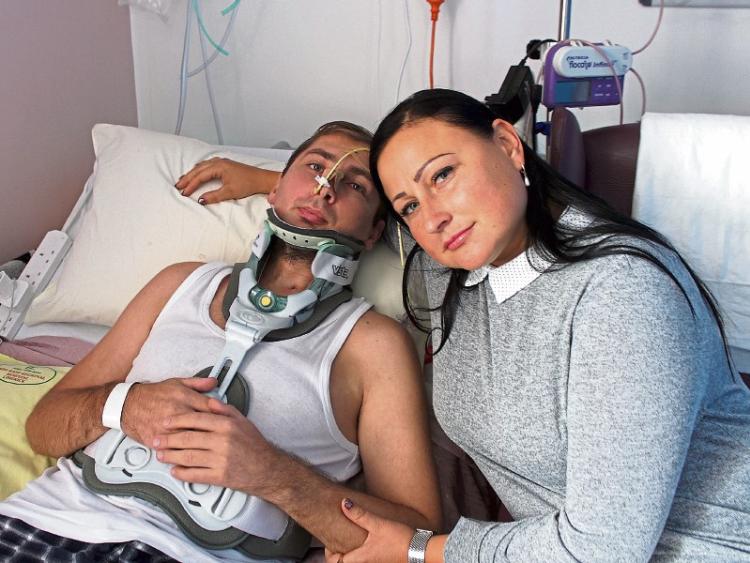 A LITHUANIAN man shot in the head by a garda is still in University Hospital Limerick – six months after the incident.

Tomas Mikalajunas and Aurimas Petraska were stopped at a checkpoint between Ardagh and Shanagolden on June 28, 2016. It is understood the firearm was accidentally discharged.

Mr Mikalajunas said: “I was driving home with my friend. I saw the police with their lights and I stopped. One of the guards was shouting and screaming. I put my hands up and I was shot.”

He denied he was involved in any criminal activity. Mr Petraska has been charged in connection with a number of robberies in three counties.

Michael O’Donnell, solicitor for Mr Mikalajunas and his wife Gintare Mikalajuniene, said they have told him what they are going through is a “living hell”.

“They say there is no light at the end of the tunnel with regard to explanations as to why and how this has happened,” said Mr O’Donnell, who confirmed civil proceedings have been initiated in the matter.

A GSOC spokesperson told the Leader: “This investigation is ongoing. I cannot comment on or confirm any details about the investigation”.

Mr O’Donnell said GSOC hasn’t come back with any findings of developments to him or to his clients.

“There is no indication of a timeline. The family want answers and they say GSOC haven’t been very proactive in contacting them or myself,” said Mr O’Donnell.

It is understood that GSOC officials have met with Mr Mikalajunas twice and that there has been no garda interview to date.

Mr O’Donnell said the Lithuanian national remains in UHL but is nearing the stage when he can be discharged.

”He still has a feeding tube through his nose. He is able to walk and get around. His prognosis thus far is that he is going to be permanently deaf in his right ear, his jaw is damaged, there is scarring, his face is disfigured and some muscles around the neck area have been badly damaged.

“His financial situation is that he hasn’t got anything. He will be attending consultants here for the next year to 18 months in relation to the injuries that were caused. In the next month he should be discharged but the problem is what is he going to be discharged to?

“If he goes to Lithuania he will need funds to come back and forward for various appointments with consultants.

“He will be applying, I suspect, for disability benefit and for local housing to put him up until such time as he is finished with his treatment,” said Mr O’Donnell.

He said there has been a huge toll on Mr Mikalajunas’ wife Gintare Mikalajuniene and their two daughters.

“They are at the mercy of friends to accommodate them. She is travelling over every month to six weeks and they would like matters to be brought to conclusion,” said Mr O’Donnell.

In an interview with the Leader last October, Mrs Mikalajuniene said: “Why has everything calmed down? Do they want to delete this event completely? Our whole life is turned upside down. Doctors can not say when and how he recovers.

“I am very afraid that he will never be as he was before this terrible disaster. Maybe he can’t or won’t have the strength to work in his beloved job or live a full life for a 36-year-old man.

“I’m glad that my husband is alive, however, he will never be as he was,” said Mrs Mikalajuniene, who adds that their “financial situation is critical”.

They both emphasise the excellent care he has received in UHL.

“My family is very thankful to the doctors and nurses for saving my husband’s life and the good care,” said Mrs Mikalajuniene.