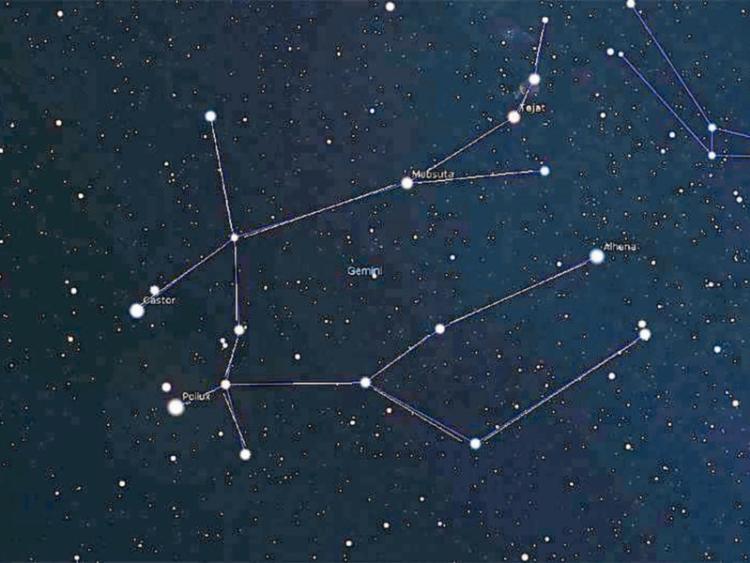 Its name comes from the Latin name for Twins, however what twins its associated with depends on the mythology you are talking about. In Egyptian astrology this constellation was associated with the idea of twin goats wile in Arabian mythology it was noted as twin peacocks. In western mythological terms, it is generally associated with people. Primarily identified within Greek mythology as twins Castor and Pollux the children of mother Leda, but with different fathers. Pollux was the son of Zeus, who seduced Leda, while Castor was the son of Tyndareus, king of Sparta and Leda's husband. In some western mythology they were also attributed to the older and younger Horus and the legendary creators of Rome, Romulus and Remus.

Even for amateur night sky observers, Gemini is fairly easy to spot, it can be found to the northeast of the Orion constellation and between the constellations of Taurus and Cancer. The brightest two stars (notably Castor and Pollux) signify the twins heads with the fainter stars symbolizing the bodies. Pollux is a giant red star which lies about 33 light-years away and has at least one massive planet orbiting it, while Castor lies about 51 light years away and has two companion stars.

Gemini is home to a number of deep sky objects. An open star cluster known as Messier 35 is located within this constellation. Messier 35 has a magnitude of 5.3 and is about 2800 light years away. It was originally discovered in 1745 by Swiss astronomer Philippe Loys de Chéseaux and then later independently discovered by English doctor and astronomer John Bevis before 1750. A bipolar double-shell planetary nebula known as the Eskimo Nebula also can be found within this constellation. Originally discovered by the German-born British astronomer William Herschel in January 1787, the nebula is surrounded by a layer of gas that used to form the outer layers of a star similar to our Sun. It can be viewed with an amateur telescope and has an apparent magnitude of 10.1.