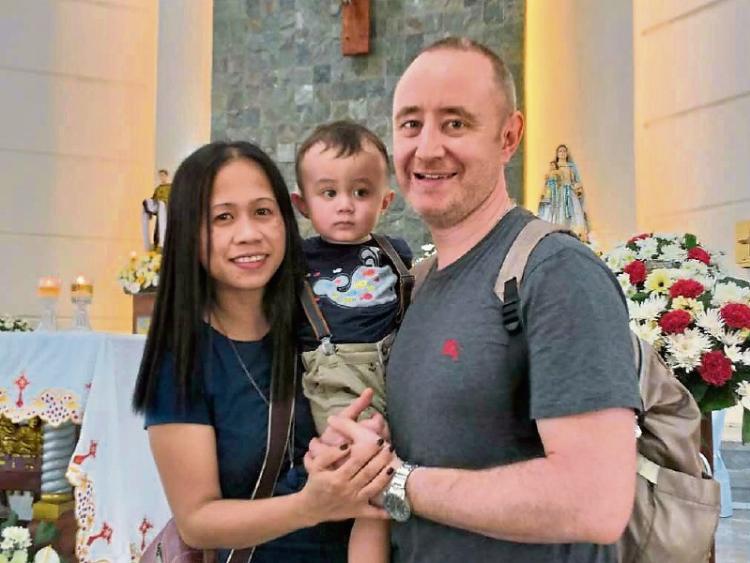 WE ARE supposedly in lockdown in Ireland but it doesn’t come close to what it is like in parts of China.

John O’Callaghan, aged 36, from Ballyneety has been living in South East Asia for the past nine years. The English teacher has told the Leader what it is like living in Chengdu – one of the three most-populous cities in Western China with a population of 14.5 million.

Currently, John cannot fly to the Philippines to see his wife, Gee, and their young son Aiden.

“I flew back to China from the Philippines on March 5. When I arrived I was told to go to my apartment and self isolate for two weeks. I was not allowed to leave my apartment building.

“Even if I went downstairs to the reception area, the security officers would take my temperature. A doctor called to my door three times a week to check on me and I had to send this doctor my temperature twice a day.

“Thankfully my quarantine period has ended and I am freely able to go in and out of my apartment,” said John, whose parents are Tony and Bridget O’Callaghan.

Every time he returns to his apartment, John has to record his temperature. Nobody is allowed visit him. The situation In China thankfully is getting better but he says he is “sick with worry”.

“I cannot however fly to the Phillipines to see my wife and son as they are on lockdown and there is also a travel ban in place between China and the Phillipines.

“Also, I cannot fly home to Ireland to be with my family as most airlines have suspended flights and other flights still operating are extremely expensive,” he says.

His thoughts are with his parents and family in Ireland, and his wife and child who he hasn’t seen for almost a month.

From living in China, John knew the seriousness of the coronavirus pandemic before it really hit home to us. Before the pubs were closed, John emailed Minister for Health Simon Harris and pleaded with him to shut bars.

“Follow the example set here in China. Shut everything down. Especially the pubs. People need to be told that they can't go to pubs or restaurants at the moment. There is too much of a risk of spreading the virus.

“Please implement stronger measures to combat the spread of this virus. I implore you as an Irish citizen who is far away from his loved ones, who are in two different countries and cannot return and be with them. God forbid something bad happens,” wrote John.

In some good news, he has been told that they will be able to return to school at the middle or end of April.

John passes the day by teaching online classes to his students, talks to his wife and son, clean the apartment and tries to keep himself busy.