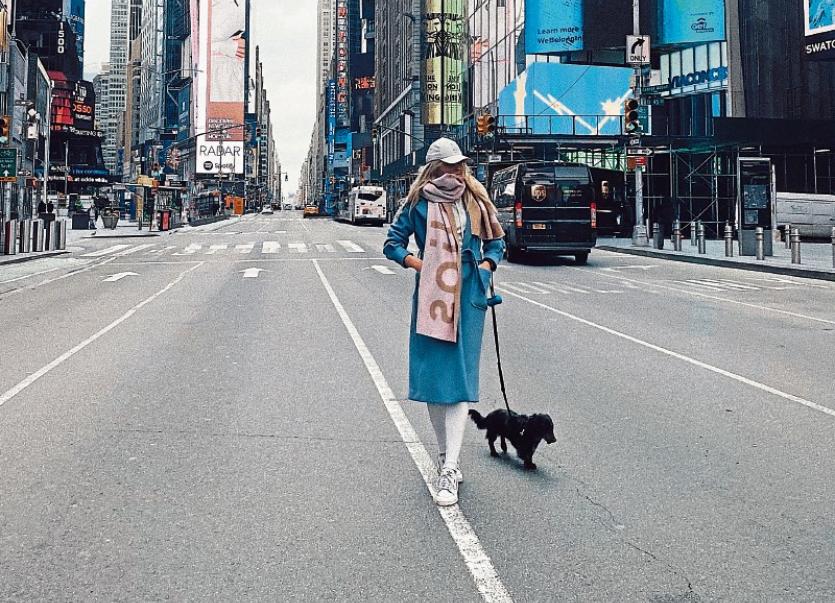 WITHIN the space of 24 hours Louise Cooney went from the bustling streets of New York with all its skyscrapers and famous dazzling evening skyline to a remote cottage in County Clare boasting panoramic views of the Atlantic Ocean and not a sinner in sight.

The fashion blogger from Dooradoyle who is regarded as one of the top influencers in Ireland packed her belongings over the weekend and flew home to Ireland on Sunday morning. Covid-19 is sweeping through the city that never sleeps and Louise knew it was better to be safe than sorry.

Both young women are well-known faces having worked in the fashion and modelling industry in Limerick before pursuing their respective careers in The Big Apple.

Louise moved to New York last September but she took to Instagram at the weekend to reveal the news to her almost 200k followers that she had decided to return home.

“Pressing pause on the New York dream for now,” she wrote. “Not the year I planned, like a lot of people, but NY will always be here.. much bigger things going on in the world right now.”

While Louise and Charlotte had both been taking all the necessary precautions, practicing social distancing, hand hygiene and wearing face masks, the nature of New York with its huge population and small living quarters made life difficult and peace of mind out of reach.

“Most people live in small apartments so I think for people’s mental health, the governor there is afraid to say stay in one room for the foreseeable. It’s very different, that’s why I couldn’t imagine staying  there during this,” said Louise.

The fashionista had been following the reports from Ireland of strict restrictions being put in place and says New York is much more relaxed in comparison.

“They are taking it seriously there too but the numbers are growing so quickly and the lengths that the government are going to isn’t quite as extreme as it is here and it just makes me think that Ireland will get it under control faster.

“It’s not in lockdown in New York yet. It’s social distancing. It’s not like Ireland where when you’re out in the country you might not meet anyone, in New York you will meet people and all you can do is your best to social distance. I had my dog Cooper over there with me so I had to bring him out for a walk.”

The dachshund has come back home with her.

Both Louise and Charlotte had both lived alone but decided to move in together when the coronavirus took hold in the city.

While Louise has health insurance in the US she isn’t completely sure of the extent of the coverage in a crisis like this.

“The healthcare system is very expensive there. If I use it all there is seven grand deductible. That is what I would have to pay if I went into hospital and if you don’t have insurance and are brought into hospital, I heard one report of someone having to pay 35 thousand. The tests are free for coronavirus but being treated for it and a stay in hospital I don’t believe is.”

Lousie and Charlotte are now self isolating in a lodge in Doolin.

“We are here for 14 days. We are both fine but are taking all the precautions.”

She is now looking forward to  getting home to her family in Dooradoyle - her parents Tony and  Grainne, two sisters Grace and Nicole who are both working from home, and her brother Peter who is finishing his college course from home.

“I had to stop by yesterday to pick up groceries and stuff but we couldn’t go within two metres of each other - we couldn’t go in for a hug or anything. It’s a weird time.”

She feels “much safer” since arriving back in Ireland.

“We can take it at a far slower pace because nobody has any control over this. At least here we can be around family and feel safe and we are in a country where we have citizenship and healthcare.”

As a fashion blogger Louise’s  main source of income is sponsorship from wearing clothes and posting videos.

While a good few jobs have been cancelled she can still do  “some bits”.

“If I have made commitments in advance and if I can work around it and I can wear clothes that are appropriate, then great. I’m lucky that I still have a little bit of work coming in because I actually wouldn’t qualify for unemployment in the US or here and I obviously still have rent to pay out.

“Like everyone else I have bills and I can’t get anything subsidised. So just like everyone else, I am hugely out of pocket so I am just trying to do what I can to make it work.”

Louise is very conscious of being sensitive to the situation while at the same time trying to ensure she can continue with some form of her work.

“I would be conscious of not taking advantage of any situation. It’s just about being realistic - what are people actually wearing and what do people want to see.”

While nobody knows how long this crisis will go on for, Louise does hope to return to the States once things turn a corner and the situation settles down.

“We’ve just no idea when it is going to be over. That’s the thing and that’s why you would be nervous about staying there - you just don’t know.

“Rent is very high over there. You want to get back when the city is up and running again but until then there is not really much point in being there to live in a room.”