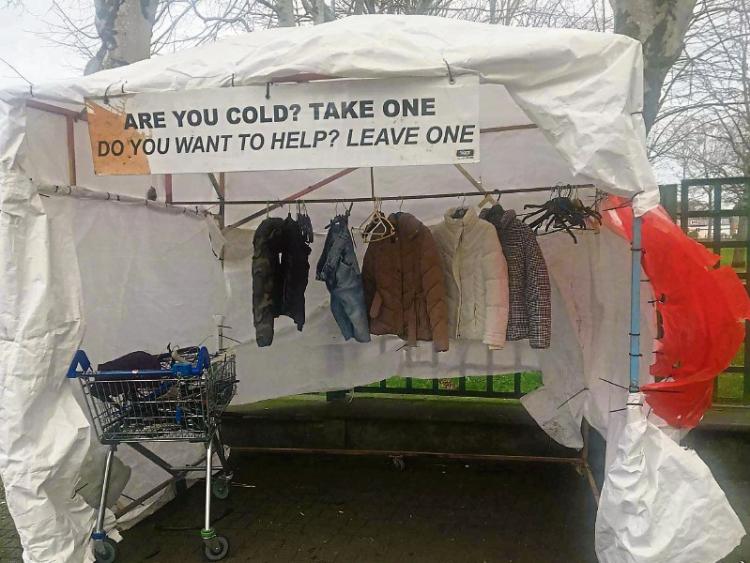 Audrey Ryan started the scheme after Limerick woman Louise Casey died on the city streets in 2016. She initially reported the coat rack, which was located in Arthur’s Quay Park, as stolen after in went missing in the early hours of last Saturday morning.

However, it soon transpired that the council had moved the rack inside in preparation of Storm Dennis.

Now Audrey has been told she will need a license if she wished to continue to operate the coat rack, despite running it for the last four years.

She claims the council has moved the rail because it is “an eyesore” on the run-up to the St Patrick’s Day celebrations.

“I think it was taken away because of the big wheel that is coming, and they don’t want it to be an eyesore,” said Audrey.

However, a spokesperson for the council denied this and said the coat rack had become a health and safety issue.

“At the height of the stormy weather at the weekend, Limerick City and County Council removed the frame and tarpaulin as they had become a health and safety risk. The tarpaulin had blown off the frame and a decision was made to remove it from its location in case it toppled over causing injury to a member of the public,” said a spokesperson.

“Limerick City and County Council categorically denies that any of its staff said the frame was being removed because it was an eyesore. The frame was observed by council staff before Christmas and the owner of the frame was told that it would have to be removed as it didn’t have a license. The owner promised to do this after Christmas but this did not happen.”

The council claims that while the coat rack was in position, staff “consistently cleaned” the area around it.

“Unfortunately the area had become a dumping ground for all sorts of clothing including underwear and other rubbish. It was also being used as a shelter by a number of people experiencing homelessness. 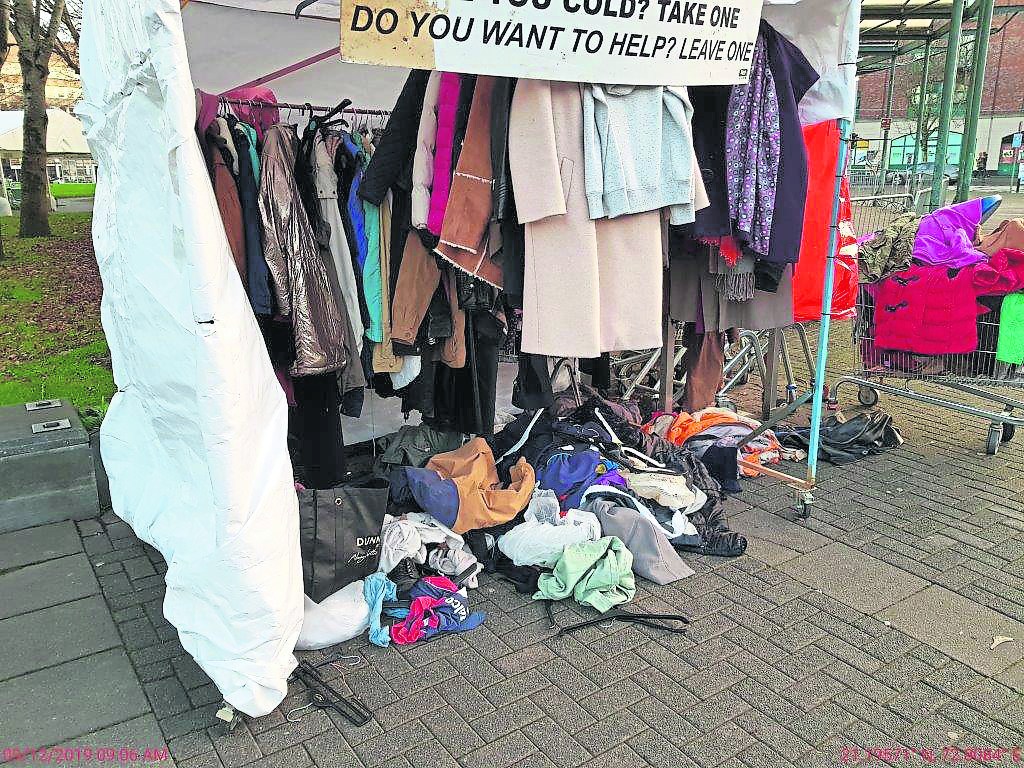 Above: A picture taken by a Council staff member of apparent disarray on the site

"Sadly, staff also noticed discarded drugs paraphernalia in the vicinity, items which could cause serious injury to children and adults if they tripped and fell. I’m sure the owner of the coat rack would agree that its original purpose was not to attract other clothes and rubbish or to cause injury to others.”

However, Audrey dismissed the council’s claims.

“It was never a dumping ground. I was in there every single day. The new rail was built with safety in mind.

“I was there the night before handing out sleeping bags and coats and it was perfect,” said Audrey, who has been operating the coat rail for the past four years.

Audrey also says that the council did, in fact, tell her the rack was an eyesore and says she is willing to take a lie detector test to prove it.

“I promise you this man said it to my face and I said the homeless are more of an eyesore. He knows he said it. If he wants I will take a lie detector to prove he did,” said Audrey, referring to a council employee.

“I am disheartened because it was helping so many. In this weather, people need them more than ever. But hopefully, it will return with the correct permit as Cllr John Costello is helping me. I will do everything I can to get it up as it did help our vulnerable in our city.”

Audrey says she has yet to receive the coats that were on the rack at the time it was taken and believes they may have been thrown away.

The council says they will “look at the various options available which can best meet the objective of the coat initiative, which is the distribution of donated coats to those experiencing homelessness”.

The council provided a photo of an overflowing facility, from December, however, Audrey pointed out that this overflow was a “once-off” as part of the Christmas drive and it was sorted by that evening.

Cllr Costelloe, who helped return the rack to Audrey, claims the council could do more.