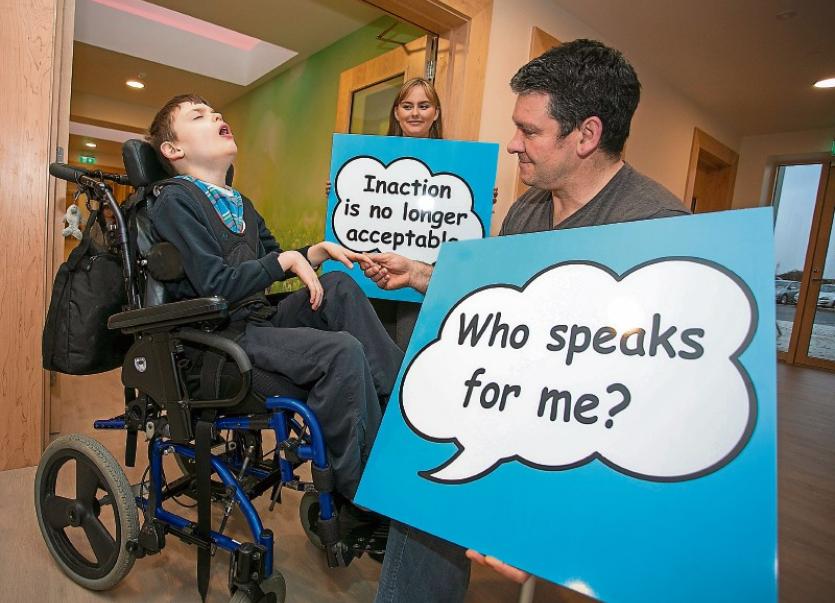 Eoin Coleman and dad Paul with Aisling Cullen, St Gabriels Centre, at an open day to highlight the need for the respite centre - Picture: Arthur Ellis

THE millions of euro set aside to deliver Limerick’s first directly elected mayor should instead go towards opening a respite house for kids with severe disabilities.

That’s the view of Fianna Fail councillor Kieran O’Hanlon, who was speaking to a motion calling for the local authority to urge the new government to release funding and allow of the new St Gabriel’s Centre in Dooradoyle to open.

Despite being completed 15 months ago after a fundraising effort from Limerick people, the facility, which cost €2.9m is out of use due to the fact the HSE is unable to cover its operational costs.

At this month’s metropolitan meeting, Independent councillor Fergus Kilcoyne saw a notice of motion unanimously passed asking that council send a letter to the incoming government so the centre can be “opened without delay”.

With a new government not yet in place, Cllr Kilcoyne said: “We should send a letter to the leaders of all the political parties, and then once a government is formed, send it onto the Health Minister.”

Cllr O’Hanlon said: “It’s a disgrace this has been neglected. Money has been wasted and squandered elsewhere. Yet this government has put down €5m for the directly elected mayor project. If we have this kind of money to spend, we should use it for something like this.”

Cllr Joe Leddin, Labour, added: “It beggars belief this sort of thing could happen. Where else in the world is a state-of-the-art facility finished yet still out of use? It’s completely representative of the shambolic neglect in the higher echelons of the HSE.”  His party colleague, Cllr Elena Secas proposed a motion that HSE bosses come in and answer questions on the centre, something seconded by metropolitan district leader, Cllr James Collins.

She also saw a motion passed asking council to write to the HSE to put in place funding for the school nurse at St Vincent’s special school in Lisnagry and ensure it does not lose its nurse this year.

Cllr Collins said of St Gabriel’s: “It was funded by the people of Limerick and here we are a year late as the HSE can’t find the funding. The nearest respite care centre is in Dublin.”

Last month, the chief executive of the centre Marie O’Leary said: “The problem is the HSE locally, who have been very supportive of the respite house development, just don’t have the funds. Acute needs projects such as this are funded year-in, year-out across the country from the HSE nationally, but nothing has come out way.”

“We have an amazing purpose-built facility completed, 120 children across our region with the most severe life-limiting challenges who badly need it, and yet it’s unoccupied,” she added.

An open day was held at the centre to highlight the need for the facility.