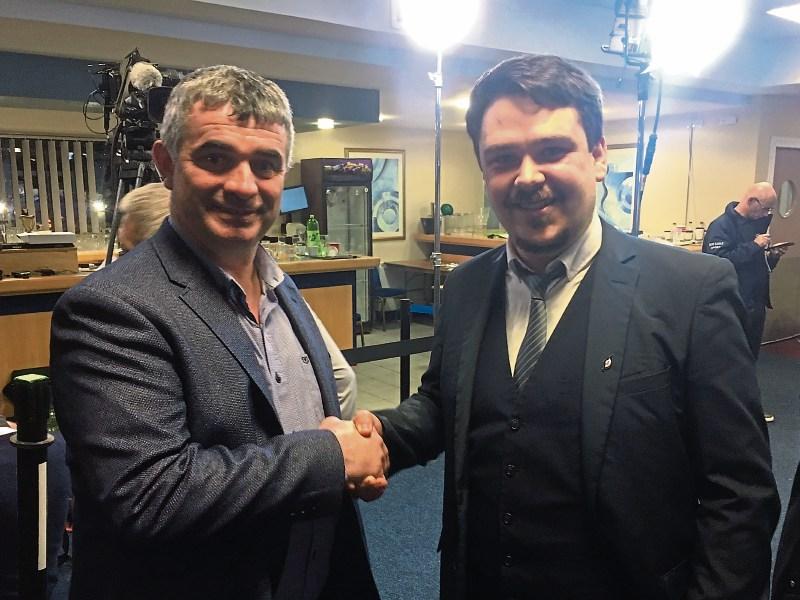 SEIGHIN O Ceallaigh and Richard O’Donoghue went toe to toe for the last seat in Limerick County for almost 16 hours.

The talk for most of the day was that the Sinn Fein man was ahead on points and would take it. As the counts or rounds continued Mr O’Donoghue kept fighting. After count five he drew ahead by eight. Before count six concluded Mr O Ceallaigh strolled over, shook Mr O’Donoghue’s hand and wished him all the best. It was a classy gesture, like two boxers embracing after a hard fought fight.

Shortly after Mr O Ceallaigh spoke to the Leader.

“I’m feeling happy. We more than doubled our vote on the 2016 general election in the first count. We went down right to the wire, down to the final count. It’s been a great day for the party right across the country. We have got some great results, that’s what we are about, we are a party - it is not just individuals. Even though I might not have been elected there are some fine TDs that have been elected and re-elected,” said Mr O Ceallaigh, who lives in Bruff.

He went from losing his council seat in Limerick City East last year with 515 number ones to almost becoming a TD for Limerick County.

“I said it last May after a disastrous result and I will say it today after a good result – we are not going anywhere, we are going to build momentum, build on what we have and deliver real change for Ireland,” said Mr O’Ceallaigh, who thanked everyone who voted for him “with any number”; his family; partner Alison Keller and three children Briaghan, Fiadh, Fionn (aged 4, 2 and nearly one) and election team.

“We won’t be stepping back from politics. We are going to build on this and come back in the next general election whenever that happens.”