Schools across Limerick set to strike tomorrow over pay 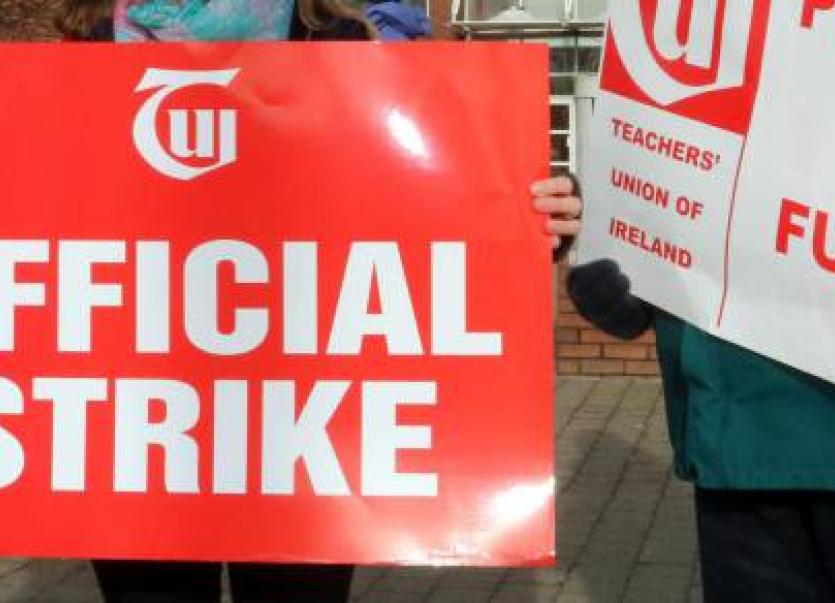 MANY post-primary schools across Limerick will be closed tomorrow due to industrial strike action over pay discrimination.

Members of the Teachers’ Union of Ireland (TUI) are set to take action over the failure to end a nine-year regime of pay
discrimination, which the Union says risks causing ‘irreparable damage’ to the education system and the service to students.

The 24-hour strike will be in effect from midnight tonight until midnight on February 4, and will also affect colleges of further and adult education and Institutes of Technology/Technological Universities.

All the Limerick and Clare Education and Training Board run schools and further education centres will be picketed tomorrow by TUI members. These include:

TUI members in Limerick Institute of Technology will be on strike as well, as confirmed in a Facebook post:

"The TUI national strike action scheduled to take place tomorrow (Tuesday) is expected to include staff in all Institutes of Technology, including LIT.

"All LIT campuses in Clare, Limerick and Tipperary will remain open on the day, and LIT has put arrangements in place to ensure continuity of support services for students and other staff members. However, our ability to deliver classes to students will be affected for those in daytime study and in research, while all Flexible learning classes are cancelled tomorrow evening (Tuesday, February 4th).

The strike comes as a result of teachers who entered the profession since 2011 still being paid at a lower rate than their colleagues for carrying out the same work.

TUI is insisting that any new programme for Government must commit to fully and finally ending pay discrimination.

TUI represents 19,000 teachers and lecturers in post-primary schools, colleges of further and adult education and Institutes of Technology/Technological Universities.

Speaking today, Limerick City Branch Chair Colm Galvin said: "Irrespective of whether they are personally affected, all members of the TUI are completely united in demanding an end to pay discrimination as a matter of urgency. The morale of teachers has been severely damaged by the discriminatory two-tier pay system. Pay discrimination has also led to a deepening crisis in the recruitment and retention of teachers.

"This crisis inevitably impairs the quality of service to students. Survey findings released by TUI last week show that almost four out of five of schools have recently advertised positions to which nobody applied, while over half currently have unfilled teaching vacancies as a result of the severe recruitment and retention difficulties. Schools are innovative in dealing with challenges and deficits in resources, but the current difficulties are unprecedented and risk causing irreparable
damage to the education system.

The largest pay discrimination still occurs in the early years of employment, with teachers employed after 1 st February 2012 earning 14% less on initial appointment and over €50,000 less in the first 10 years than they would have done before the imposition of the unjust two-tier pay system.

"Over a 40-year career, they earn over€110,000 less than a longer serving colleague. The only way to resolve these difficulties is to end the divisive, irresponsible and damaging practice of paying teacher colleagues different rates for carrying out the same work. Irrespective of how the new Government is constituted, a commitment to an immediate ending of pay discrimination must form part of its programme."