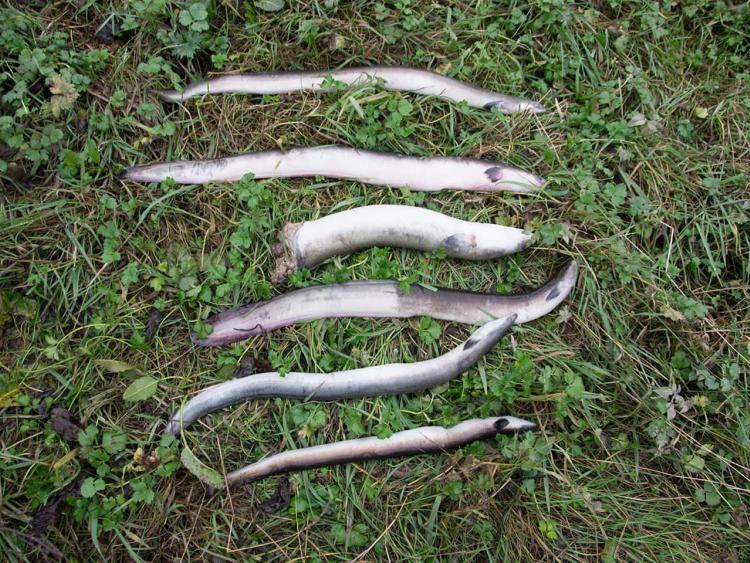 A sample of some of the casualties at Ardnacrusha Power Station

CONCERNS have been raised surrounding the impact Ardnacrusha Power Station is having on the population of local salmon and eels.

A local resident, Ken O’Connell claims that the ESB, who manage the station have “neglected” to manage fish stocks in the area - resulting in hundreds of fish being killed every year.

“This has been happening for a number of years,” said Ken, “they say they have a fish pass and they're trying to promote the salmon but there’s no actual way for the fish to come down. When the fish spawn in the lake and then come down to the power station, there’s no way for them to come down through as there’s no pass. They all have to come down the turbines. Between 30 to 40 percent of them are killed.”

Ken, who worked in the power station in previous years as did his father and grandfather, said: “the workers there now are genuine and they're not doing anything wrong. It’s the ESB policy, they just don’t care. They’re saying the plant is sustainable and renewable but it’s not, the water is renewable but the plant is not sustainable to the local environment.”

Ken added that the most affected species is migrating juvenile eels, known as elvers, and adult eels, as well as migrating salmon.

“There should be 46,000 salmon going up, and apparently now there’s only 2,000,” Ken added, “the full extent isn’t seen as wildlife then eat the dead fish immediately.”

“We have a national and global biodiversity crisis,” he said, “the ESB must do all it can to remove barriers to fish migration at Ardnacrusha and Parteen weir and to restore populations of lamprey species and critically endangered salmon and eel. Increased fish populations could have huge biodiversity and economic benefits for Limerick and other towns along the Shannon.”

Noting the low contribution that Ardnacrusha has to the country’s electricity needs, he continued: “There’s an important question over the future operation of Ardnacrusha hydroelectric station. At the moment it is operated to generate a fairly small amount of power at a very significant environmental cost and flooding risk. Its future may be as a means of controlling water levels to restore the environment and protect against flooding.”

An ESB spokesperson said: “The Shannon eel population is broadly similar to all other Irish and European eel populations being in decline for the past decade. As a conservation measure, ESB carry out an eel Trap and Transport (T+T) system for both juvenile eels moving upstream and again for adult eels as they migrate downstream.

“This activity is undertaken each year for elvers (March-September) and for adult eel (referred to as silver eel) from September to February. This programme operates under the Irish National Eel Management Plan (NEMP). This NEMP came about as a result of the 2009 EU Eel Regulation which specified that all Irish large-scale hydro stations undertake T+T on each of the catchments affected.

“ESB has heavily invested resources into the trapping and transport programme and protocols for both juvenile and adult eels with Ireland now at the forefront in Europe in this regard. Details of these activities may be found at Inland Fisheries Ireland website with whom ESB work in partnership with, along with the Marine Institute.

“Both Ardnacrusha Station and Parteen Weir operate fish passes. ESB also operates a salmon smolt (juvenile salmon) migration protocol each year at Ardnacrusha Station. This means that there is a generation regime in place which assists the downstream movement of juvenile salmon for the period mid-March to June. In addition, a spillway gate at Parteen Regulating Weir is used to assist downstream movement and attracts fish to the entrance of the fish pass.

“ESB also operate a salmon conservation hatchery (near Birdhill, Co Tipperary) which produces hatchery salmon for onwards migration to sea, and also assists with the restocking of the upper Shannon catchment with juvenile salmon.  The fish passes at both Ardnacrusha Station and Parteen Weir,  the smolt protocol and the T&T processes, all combine to assist in the downward migration of fish species in the river Shannon.