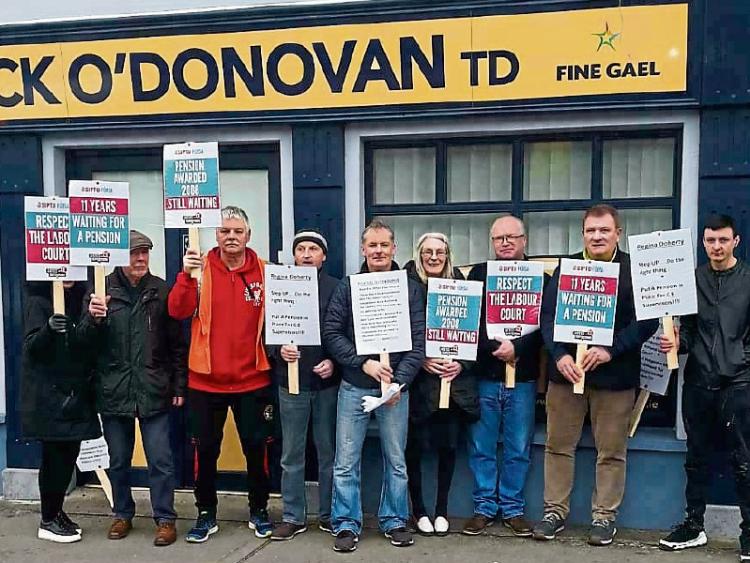 COMMUNITY Employment supervisors from West Limerick  mounted a protest outside the constituency office of Minister of State Patrick O’Donovan at the weekend.

And they intend to picket the office again this coming Saturday to publicise their anger and continuing frustration at being denied a pension scheme.

The Newcastle West protest is part of a nationwide campaign by union members of Siptu and Fórsa to highlight the fact that the government has failed to implement a Labour Court ruling of 2008 which said a pension scheme should be put in place and adequately funded.

“Patrick O’Donovan is a minister in the Department of Finance and Public Expenditure  Reform,” supervisor and union representative Pat King said at the protest on Saturday,  “and he has refused to react or to engage with the unions. He could do something. It is in his department.”

Instead, according to Mr King, Minister O’Donovan has told them it is a matter for Social Protection Regina Doherty.

“He doesn’t know what is going on in his own department,” said Liz McAuliffe, a supervisor for 24 years who had to retire in 2014 without a pension and who was supporting Saturday’s protest.

Approximately 1,300 supervisors and assistant supervisors across the country have been campaigning for a work-related pension scheme to be put in place since 2002. The Labour Court ruling of 2008 recommended that the parties “should engage without delay” but no progress was made.

Last year, faced with strike action, Social Protection Minister Regina Doherty entered into discussions with both unions. A package was agreed, according to Ms  McAuliffe. “It was put on Paschal O’Donohoe’s desk to sign off,” she said.

But nothing further has happened since.

Minister O’Donohoe,  Pat King pointed out, is the same minister who relied on a Labour Court ruling when it came to demands from the gardai.

Now, the country’s CE supervisors, about 70 of whom are in Limerick, have voted again for industrial action. “We balloted over the last two weeks and 92% are in favour of industrial action,” Mr King said.

“A lot of members of the public are shocked and surprised that we haven’t got a pension. They think we are all public servants.

“There is considerable anger among CE Supervisors concerning their treatment by the Government after more than a decade of waiting for the 2008 Labour Court recommendation regarding their pension rights to be implemented,” Fórsa Assistant General Secretary, Ian McDonnell, said.

Siptu organiser Eddie Mullins pointed out that  CE supervisors “play a key role in the provision of much-needed community services such as crèches, meals on wheels, upkeep of community halls, GAA and soccer pitches, Tidy Towns support and maintenance of green areas around the country.”

The proposed industrial action will involve the withdrawal of co-operation with government departments, state agencies and local authorities and could escalate to include 24, 48 or 72-hour work stoppages and the placing of pickets.