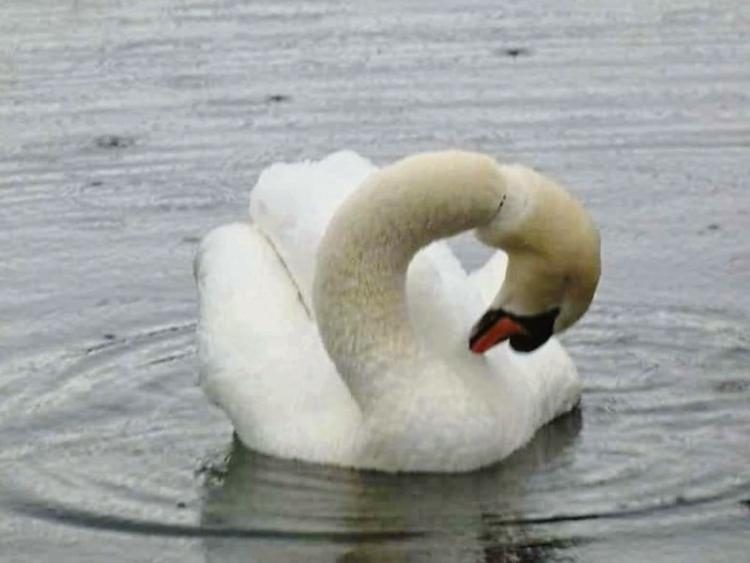 The six-pack ring was seen around the swan's neck in Castleconnell | Picture: Shane O'Brien

A SWAN was seen suffering with a plastic six-pack ring wrapped around its neck, a direct result of illegal dumping in County Limerick.

The elegant bird was seen with the ring tightly noosed around its neck in Castleconnell at the weekend.

The creature was spotted by local photographer Shane O’Brien, who shared the photos with Green Party councillor Sean Hartigan, who has been on a mission to locate the swan.

Condemning the issue of litter, Cllr Hartigan said on Facebook that plastic “causes many wildlife fatalities every year.

“He has a plastic six pack ring on his neck. Litter doesn't just look bad, it kills wild and domestic animals through ingestion, strangulation and by preventing them from feeding.”

Animals being strangled and distressed by pollution and litter is a serious issue affecting marine and fluvial wildlife across the globe.

It has become more prevalent in ocean wildlife, with large and endangered sea creatures ingesting plastic waste and dying as a result.

Speaking to the Leader, Cllr Hartigan said: “Littering and illegal dumping is an issue I have to deal with on a daily basis.

“Only for the work of voluntary groups like tidy towns, An Taisce and Team Limerick Clean-up we would be wading in our own waste.

“The council needs to take back control of waste disposal and provide everyone with a bin and provide more litter bins on streets and in parks.

“It could be funded through property tax and would ensure every household had a bin. I will do my best to catch the swan tomorrow and cut off the plastic.

“He has a plastic six pack ring on his neck. Litter doesn't just look bad, it kills wild and domestic animals through ingestion, strangulation and by preventing them from feeding.”

Cllr Hartigan is one of two of Limerick’s first ever Green Party councillors, and represents City East. Since the discovery on Saturday, the swan has yet to be seen.