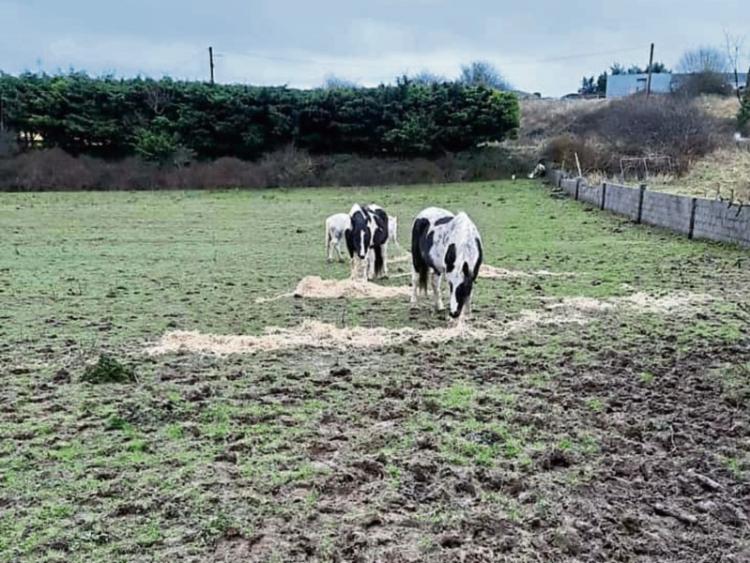 The horses have been cared for by volunteers from Deel Animal Action Group, who are appealing to have the animals removed from their current location

“NEGLECTED” horses that were left without food or shelter in a field in West Limerick have been removed after an urgent appeal was made for their rescue.

Eight horses from a field in Rathkeale were reported as being “malnourished” and with “dull coats” has been cared for by Limerick volunteer group Deel Animal Action Group in the days before their removal.

It is unknown who has taken the animals, and where their current location is.

An order for the care of the horses was served by the Department of Agriculture on Monday, December 30, 2019 after a horse was rescued from a ravine in the field and numerous dead horses were found.

An investigation was launched by the department, though the volunteer group continued to provide the animals with food and claim they were the only people doing so.

Upon revisiting the location on Thursday, January 2, the volunteer group has stated that “it was abundantly clear that the horses had not been fed and still had no proper water supply”.

In a Facebook post, the group said: “How long do these horses have to wait before action is taken? The field is a burial ground for horses, there are bones of horses scattered everywhere and even more disturbingly, we came across the leg and hoof of a pony in the muck. It still had hair and flesh on it. What in the name of God happened to this poor horse? The dead bodies of the other two ponies are still in the field being heavily scavenged.

“It is an absolute disgrace what’s going on. We had organised, on Monday, rescue back up for 10 horses and had transport at the ready. The local gardai were happy to assist. But the Department decided, in their wisdom, that the horses should stay put and either starve to death at the hands of their indifferent owners or fall down a ravine and break their necks.”

A garda spokesperson said: “On Monday, December 30, 2019 at approximately 10am, Gardaí were called following reports of two dead horses in a field in Rathkeale, County Limerick.

“One horse was also observed trapped in a ravine and was rescued by Gardaí and Fire Services. The Department of Agriculture were notified. Enquiries are ongoing.”

A Department of Agriculture spokesperson stated that on Monday, December 30, the department vet found the horses “to be in reasonable condition and not in need of immediate attention”.

“Notices were posted at the site requiring that feed and water be supplied to the animals and that they comply with EU identification regulations. A Department veterinary inspector official visited the site again on January 6. There are currently three horses remaining at the site in good condition with adequate feed. The remaining animals were found to be in reasonable condition and not in need of immediate attention.”