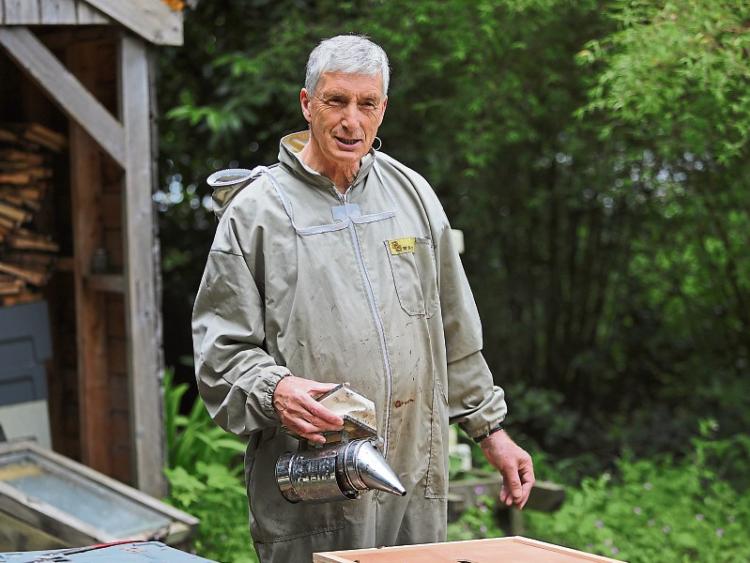 Fr Simon Sleeman, a monk in Glenstal Abbey, sat down with the Limerick Leader to talk about his experience with depression.

And to try and help the many others who may see themselves in him. Fr Simon spent just shy of three months in Saint John of God Hospital in Stillorgan, far from his monastic home in Murroe.

It is a long and winding road up to Glenstal Castle. And as Fr Simon tells his story in a quiet room near reception the lyrics of the Beatles’ The Long and Winding Road comes to mind as he was once left standing there.

The wild and windy night

That the rain washed away

Has left a pool of tears

Crying for the day

Why leave me standing here?

The 68-year-old said depression is often caused by something lurking in one’s background.

“Many people have some sort of trauma. The one for me would have been going to boarding school aged eight. I remember arriving at the school with my father and I was shown around. The next thing my father disappeared down the avenue. I didn’t understand that I was going to be left there, abandoned. It was very traumatic,” said Fr Simon.

Due to his father’s British Army background - Richard Brian De Fontenne Sleeman of the Royal Sussex Regiment - the young Simon had already lived in England, Germany and South Africa. The Sleemans finally settled in Killavullen. After putting down some tender shoots in north Cork he was uprooted to a boarding school in Wicklow.

“What I tended to do was bury it away but as you get older you are less able to defend that trauma. When I went back as headmaster of Glenstal Abbey school in the summer of 2018, perversely I think I did go back because there was something going on that I needed to get in touch with.”

There was a proud British Army tradition in the family but Fr Simon eschewed rifles for religion when he entered the monastery at 19.

He lived the next half a century without any bouts of depression. Maybe some minor anxiety but nothing that affected his life to a major degree. Even minor anxiety would be a surprise to those who know Fr Simon. Tall, slim and charming, he cuts a confident dash in all social circles but for months he hid his demons.

“This (feeling) was completely new. It was a combination, I reckon, of historical stuff which I had tried to deal with but unsuccessfully and a demanding psychological situation [new headmaster] which I was past coping with.”

He had previously headed up the exclusive secondary school in the nineties before becoming the bursar.

“For me personally becoming headmaster was the trigger. Over 250 children, parents, staff, the hours I was working, the pressure. There was no internet back then [in the 90s], no mobile phones -  it was a completely different world

“By October 2018 I was going down. I could feel it. I knew I was in real trouble by December.”

A very good friend of his - Sacha Hamilton, Duchess of Abercorn - died. Fr Simon was asked to pay a tribute at the funeral in Northern Ireland

“I remember ringing her daughter and saying, ‘I’m not sure I can do this, I feel so anxious and so out of control’. I had to warn them. I just held it together. I remember looking down at the congregation in the church and saying to myself, ‘I have nothing left’. I was spent, gone. It was a level of anxiety I’ve never known.”

However, if you were in that church you would never know that the priest, who had just delivered a moving eulogy, was battling his own demons.

“It was a persona. We are all very good at projecting something. The experience of going down this sort of dark hole is really frightening. You are down in a dark hole and there doesn’t seem to be any bottom. Am I going to fall through this and lose all sense of who I am?”

Fr Simon had all the symptoms of depression - anxiety, low energy, not sleeping, poor concentration - but he struggled on.

He said suicide crossed his mind due to the black hole he was in but nothing concrete. Fr Simon said a friend of his suffered from depression.

“He fell off his motorbike, punctured a lung and broke ribs. He was in horrific pain but he said it didn’t compare to the pain of depression.”

In January, the monk continued to live a life of quiet misery. Even the man above couldn’t provide any solace.

He took a step back from the headmaster role for two weeks and saw a psychiatrist. Then he sought a second opinion. After that consultation in Cork, Fr Simon stayed with David Magnier and family in Cork.

“When they saw me come down in the morning they said you need to be in that place. I was shaking and miserable. A phone call was made and a friend drove me up on Valentine’s Day.”

That place - Saint John of God Hospital - would lift him out of the deep, dark hole and get rid of the anxiety. After months of keeping a stiff upper as his British forefathers decree he surrendered himself to the staff.

“The thought of going to a mental hospital was so out of my mindset. It is like going in to jail I imagine. You are photographed, they take all your details and then you are taken up to a ward -this is all new territory. They search everything and take any medication you had - fair enough.”

A big shock was that he was sharing a room as he was used to his own space in Glenstal. He can look back now and laugh.

“I got into bed that night and at 2am my roommate started effing and blinding, screaming his head off. You realise you are in a hospital. I remember going out to the nurses. I said, ‘I am here for rest and relaxation, this isn’t going to work!”

Fr Simon was moved to a new room with a born again christian of all people.

“When he discovered I was a monk I was finished. He was determined to convert me! He snored for Ireland so I went to the nurses with a recording of him snoring.

“They said, ‘You can’t do that, you are infringing patients rights!' I said, ‘I don’t care what I am doing. Could you sleep with that noise because I can’t sleep with that’,” laughs Fr Simon.

His third bedroom-fellow was a more agreeable companion.

“Everybody I met was lovely. They are broken people, humble, no bulls**t, you are just with people who are in trouble. That was so refreshing in a way. You don’t have to pretend anything.”

Despite the strangeness of his new surroundings two things comforted Fr Simon.

“You get a team of people and who was my psychiatrist? John O’Donovan, son of Derry O’Donovan who I have played a lot of golf with so I said this is all working.

“You just hand yourself over and say I am a mess and let them take over. They know what they are doing. The staff and nurses are wonderful. They were such a nice and pleasant crew - I am very fond of them.”

He says the very first thing they wanted is to get him sleeping so he could recuperate.

“Then it’s medication, it is being minded, that sense of security, you can rest, you have nothing to do, you can read, there are occupations, the food is very good, you are encouraged to exercise, sleep is key, care, therapy, time - it’s a combination of things.”

After a month Fr Simon started climbing out of that black hole.

There was a Starbucks nearby where he could meet people and a bookies. Although he got in trouble when he tried to set up a sweep in the hospital for the Grand National.

“I thought it was a good idea. They said, ‘What are you doing? People are here for addiction - stop!’ They nearly threw me out!” he smiles.

When they did throw him out , when he was well enough to leave, he describes it as “coming home to yourself”.

“It was dealing with something that needed to be dealt with. It was like a festering wound that suddenly had been lanced.”

While depression is described as a “black dog” Fr Simon prefers to describe it as his guide dog.

“There are different forms of depression. Mine was more reactive to the situation I was in. My chosen addiction had been work to keep the trauma quiet or whatever was cooking on my inside which I needed to deal with. The older you get, your defences are thinner. I was busy all the time. I was almost keeping ahead of the posse, keeping ahead of what I had to deal with. I was running from it .

“For me depression and anxiety are sicknesses. They are like a pain in your stomach or when you put your finger in the fire you get pain. They are signals that something is wrong. You need to take care of something here.”

While he was in Saint John of God Hospital, Fr Simon resigned from the position of headmaster of Glenstal Abbey. While he is no longer in and around classrooms and pupils he hopes many will learn from his story.

See next week’s Limerick Leader, print editions, to read how Fr Simon manages his mental health now and why he believes there is a deepening mental health crisis.

If you have been affected by the preceeding article, contact any of the following organisations