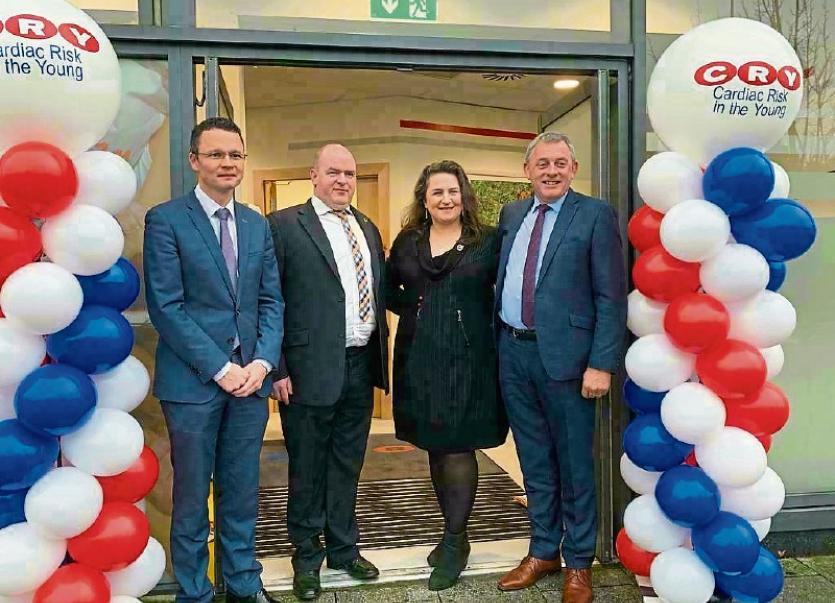 TWO young West Limerick people who lost their lives to Sudden Adult Death Syndrome in 2011 were remembered when a new, state-of-the-art unit for CRY, Cardiac Risk in the Young, was officially opened at Tallaght Hospital.

Niamh Herlihy was about to celebrate her  21st birthday when she died in April 2011 while Darra O’Donovan was just 15 when he died in December of the same year. Both were from the parish of Monagea and their deaths plunged their families and community into mourning, but also sparked  a fierce determination they would not be forgotten.

In the years since their deaths, the annual CRY Monagea cycle and run has taken place in their memory and over the years  has raised over €200,000 for CRY.

CRY, a charitable organisation,  provides free cardiac screening, testing and support to individuals and families who are bereaved by Sudden Cardiac Death.

But up to now, the organisation has been operating out of temporary premises and depending on donations for its services.

Last month however, Minister for Health, Simon Harris officially opened  a new, dedicated CRY unit, a unit which, he said, would help to save young lives.

In honour of CRY Monagea’s contribution to the organisation, there is a room named Monagea in the new unit.

For Niamh’s parents, Liam and Marie and for Darra’s mother, Claire Scanlon and her husband, the opening of the new unit marked a huge milestone in their ongoing mission to support and promote CRY.

It was, Claire Scanlon said, “a memorable occasion and one that Tom and I were so proud to witness”

“To share the journey with Liam and Marie was special. An emotional but fantastic day that had West Limerick threads woven throughout,” she said.

And both she and Liam Herlihy expressed their gratitude to the hundreds of men, women and children who had helped raise over €200,000 in the past seven years.

“We are proud of the contribution CRY Monagea has made to getting the new centre open,” Liam said. And he added a special thank you to Minister of State Patrick O’Donovan for all his help in securing government funding for the centre.

Tommy Fegan, Chairman of CRY Ireland spoke for all families when he said: “We are delighted with the Government’s support which has enabled us to expand our services. CRY (Ireland) is delighted that the partnership with government and Tallaght University Hospital will enable us  to provide an even more efficient, free screening and assessment programme to families affected. We also plan to extend our Family Support Programme to offer emotional support to families suddenly bereaved by the loss of a young member of the family”.