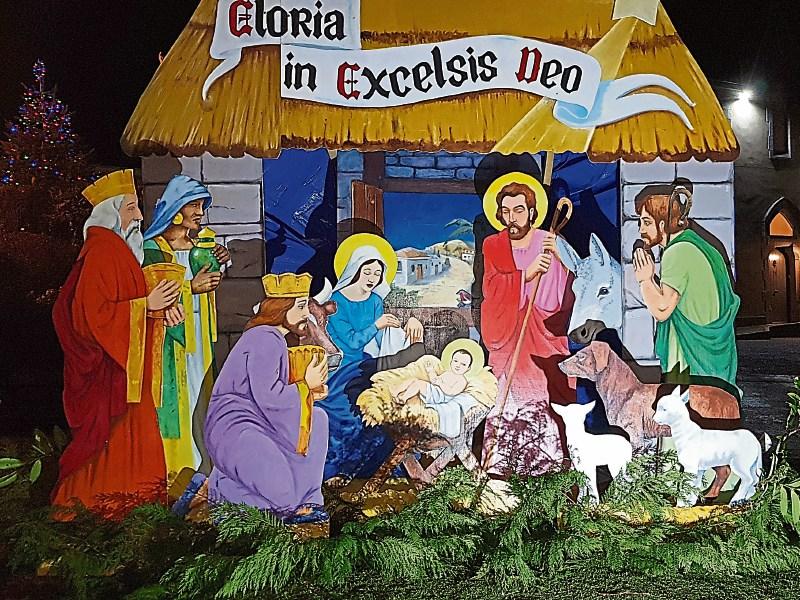 The new crib on the grounds of Doon church was sponsored by Bleisce, the parish journal committee. It was designed and crafted by artist James Holmes

CONTEMPORARY celebrations of Christmas are marked by excess which can take many forms: shopping, eating or drinking.

The crib is a makeshift dwelling and reminds us that there was no room in the inn for Joseph and the heavily pregnant Mary. They had to find refuge outside the town of Bethlehem in a shelter for animals.

The sign given to the shepherds is that of an infant wrapped in swaddling clothes and lying in a manger. Familiarity dulls our senses to the very ordinary and humble nature of the birth of Jesus. Christ shares our human lot fully, sharing the lot of the homeless and the dispossessed.

The infant is laid in a manger, a feeding trough for the animals. It points to how Jesus will give himself to become our food. The extent of God’s love is shown right from the beginning of Jesus’ life on earth. The ox and the donkey are given pride of place at either side of the manger. They warm the newborn infant with their breath, but they also point to his true identity.

The prophet Isaiah states at the opening of his book: “the ox knows its owner, and the donkey its master’s crib; but Israel does not know, my people do not understand.” Although many in the world fail to recognise Jesus’ birth, the lowly ox and donkey acclaim him. There are many other animals in the crib. The shepherds come with their sheep and the Magi with their camels. At this time when all who inhabit the earth are threatened by climate change, it is worth noting that representatives of all creation rejoice at Jesus’ birth.

The Magi only arrive on the scene on January 6 and often do not feature in cribs. The Magi bring three gifts, gold signifying Jesus’ kingship, myrrh pointing to his burial and frankincense indicating his divinity. They are assumed to be three, but neither their number nor gender is specified.

Traditionally they are depicted as three kings from the three continents of Europe, Asia and Africa. Early Irish monks spoke of the three leading a great multitude, male and female, young and old, infirm and able bodied to the newborn Jesus. There have been some criticisms regarding the public display of cribs.

Correctly understood however, the crib is a fitting expression of openness and inclusivity for an increasingly multicultural Ireland.

The village of Doon in east Limerick has just recently installed an outdoor crib in the grounds of the parish church. The crib, crafted and designed by local artist, Mike Holmes, features the holy family, the shepherds, the Magi from the different continents with their gifts and the animals.

The outdoor crib, which was blessed on Sunday, December 15 by Fr Jimmy Donnelly, parish priest, is well worth a visit. The crib not only reminds us of Christ’s coming 2,000 years ago at Bethlehem, but also how Christ comes again this Christmas in 2019.

The impact of the birth of Jesus is captured by Pope Francis in his letter from Greccio on December 1, when he states: “By being born in a manger, God himself launches the only true revolution that can give hope and dignity to the disinherited and the outcast: the revolution of love, the revolution of tenderness.”

May this revolution take place in every heart and so bring Christ’s gift of peace to every family and community.