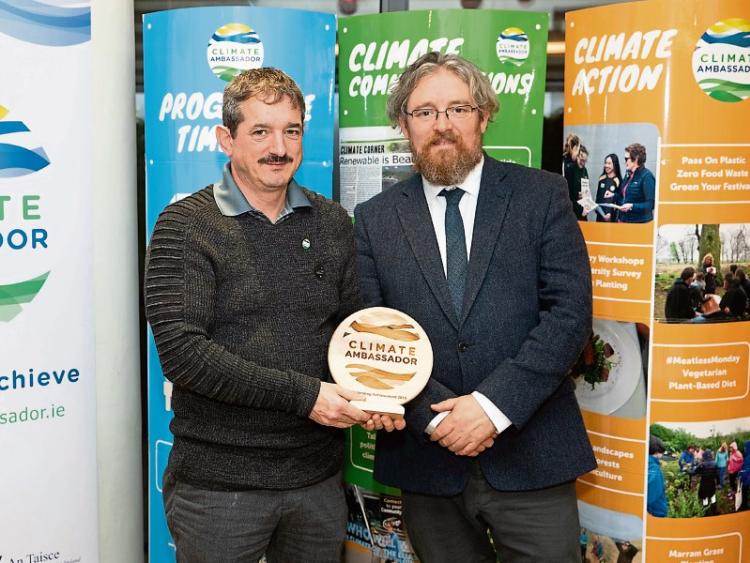 CLIMATE Ambassador David Hughes, who is employed at Kostal in Abbeyfeale, has been honoured with an Outstanding Achievement Award by An Taisce.

David, who is based in Listowel, was one of 130 people selected from all walks of life to be Climate Ambassadors in 2019. But at a ceremony in Dublin, his work in that role over the past year was acknowledged as outstanding.

One of the Climate Ambassador Outstanding Achievement award went to David Hughes.

David, who lives in Listowel but works in Abbeyfeale, demonstrated his commitment both in his professional and personal life, the citation states.

He set up recycling and composting stations at Kostal, Abbeyfeale and also managed to remove any single-use plastic cups in his workplace. He also gave a talk to local businesses in Listowel on understanding Climate Change. David also wrote and delivered a reading of a poem on The 4 Climate theories for Listowel Writers Week.

He visited the local secondary school and IT Tralee to speak about climate change and helped organise local Fridays for Future events.

Read also:  Defendant in Limerick waste case has a number of vehicles "being closely watched"

He  has also been really active at a community level, founding the Listowel Climate Emergency Group and giving talks through Transition Kerry and planting trees and wildflower meadows.

David’s Outstanding Achievement Award was one of ten awarded at a special ceremony attended by Minister for Communications, Climate Action and Environment, Richard Bruton whose department funds the Climate Ambassador programme which is operated by the Educational Unit of An Taisce.

The minister acknowledged the commitment of all 130 Climate Ambassadors and their valuable work in communities all over Ireland.