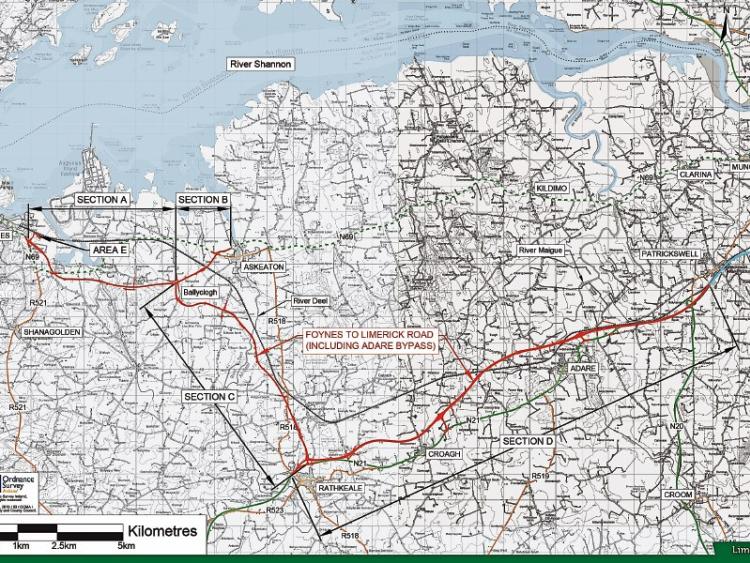 The public have until February 14 to make observations

THE planning application for the €450m Adare bypass and new road to Foynes is being lodged with An Bord Pleanála this week, a  development  which will be greeted with relief by Adare residents and commuters alike.

The fast-track planning process is, however,  likely to take up to 12 months and will involve submissions and an oral hearing.

The detailed route and documents for the 33km road can be viewed in the council offices at Merchants Quay, Dooradoyle and Rathkeale and in libraries in Adare, Rathkeale and Askeaton from this week.

Members of the public will have until February 14, 2020 to make any observations or submissions, after which  An Bord Pleanála will set a date for the oral hearing. This hearing, according to Fianna Fáil TD Niall Collins, will give “impacted landowners” a chance to engage with An Bord Pleanála. The Bord’s decision is expected before the end of 2020, after which the project will move to Compulsory Purchase Orders and tender stage.

But even with planning permission and funding in place, the €450m project is estimated to take six years to complete, making it unlikely that building work will be finished in time for the Ryder Cup in 2026. Locally, however, the hope is that the Adare by-pass section, at the very least, will be ready.

This week’s development will nonetheless buoy up residents in Adare who have to deal with up to 17,000 vehicles a day passing through their village and it will come as a huge relief to the commuters who have to contend with the daily tail-backs in and out of the village.

The government  is committed to the project, Fine Gael Minister of State, Patrick O’Donovan has stated, pointing out that he had lobbied hard to have it included in Project Ireland 2040 as part of the National Development Plan. “We  are the first government that have clearly laid out as national priorities the importance of linking the deep-water port at Foynes to the national motorway network, while also providing a bypass of Adare.”

The new road will begin at  Attyflynn, Patrickswell with a 17.5km stretch of motorway going north of Adare and on to Rathkeale, with junctions off to Adare, Croagh, Rathkeale and Askeaton. The Rathkeale to Foynes section will involve 15.6km of dual carriageway. The planning application includes three railway bridges, a 200-metre bridge across the Maigue at Adare, four other river bridges and 18 smaller river/stream bridges, 22 underpasses, 16 overbridges and underbridges, a variety of roundabouts as well as accommodating the Great Southern Greenway.

Meanwhile, Deputy Niall Collins was told that Iarnrod Eireann has completed a detailed design engineering report for the re-opening of the  Foynes railway line. A draft report was submitted to the Shannon Foynes Port Company for its consideration in recent weeks, Transport Minister Shane Ross said in a written reply to a Parliamentary Question.

“The completion of this detailed design can now inform the commercial case for potential reinstatement and allows Shannon Foynes Port Company, in conjunction with Iarnród Éireann, to commence a detailed market review of potential future users,” Minister Ross said.