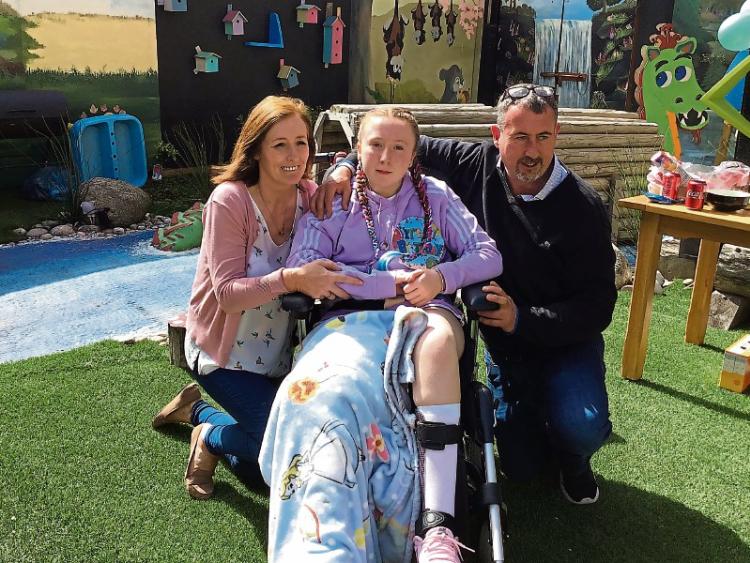 TV Show DIY SOS is appealing to Limerick tradespeople to volunteer their services and build an extension for Amy, pictured with parents Sharon and Mark

A PROJECT set to transform the life and home of a young Limerick teenager is calling on the community to pitch in their efforts for the worthy cause.

Thirteen-year-old Amy Mulcahy is set to have her Annacotty family home revamped with the help of RTÉ’s DIY SOS – The Big Build early next year.

The Mulcahys will be the second family to feature on the formerly UK-based show, which will be presented by Baz Ashmawy.

In February this year, Amy was involved in an accident with her local rowing club, when her boat overturned suddenly and she became trapped underwater for several minutes.

While Amy had been resuscitated, she had suffered cardiac arrest, had severe brain damage and her family were given little hope of her recovery.

Doctors informed the family that Amy would never see, speak or walk again.

In just nine months Amy has regained her sight and her speech.  She is determined to walk, though she lost some use of her limbs from the waist down and now uses a wheelchair.

The teenager has recently returned to her Limerick home after undergoing rehabilitation treatment in Temple Street and National Rehabilitation Hospital.

Though delighted to be home, the house which Amy shares with her mother, older brother Calum and his toddler twins is simply not suitable for any of Amy’s needs.

As she can’t access the upstairs of the house, the family sitting room has had to become Amy’s bedroom, and she is currently without access to a bathroom.

Amy’s parents and all the family desperately want Amy to have the space to live with dignity at home and try to continue her rehabilitation, but right now they feel the house is making that impossible and further disabling her.

The family’s hopes are for a small extension to the back of the house to try and give Amy some dignity with a downstairs bedroom and wet room – and of course an accessible space where she can also have her privacy when needed.

The show is calling on the invaluable help of trades and suppliers in the community, in the county of Limerick, and right around Munster and Ireland to come together to make this happen.

To get involved, please email your details to  diysoslimerick@motive.ie  or call 01 5313306 to register for a Trades Day which will held in Annacotty on January 15 (location yet to be confirmed).

The build itself will take place between February 11 – 20.

DIY SOS’s Sharon Newman said: “It's a mammoth challenge we have ahead trying to 'rally the troops' so to speak, as the programme is all about community spirit and getting all those involved who will donate materials and products to make this house a home again for Amy.”