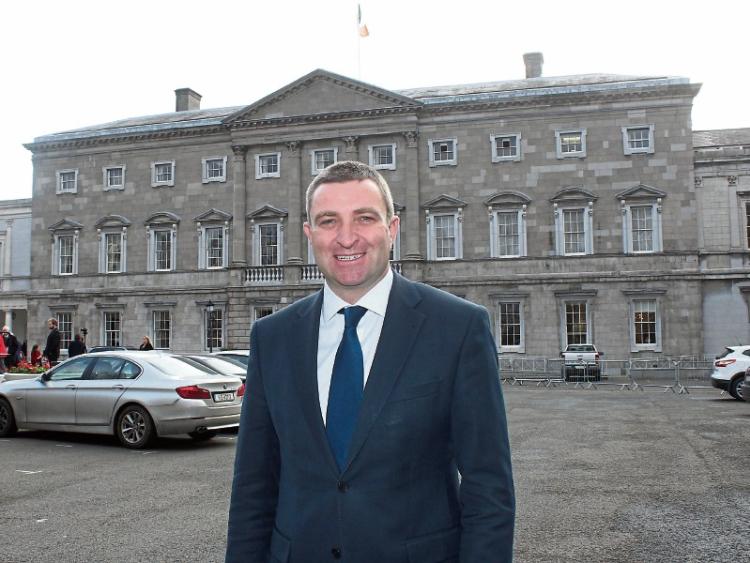 Niall Collins has been asked to step down from the party's front-bench | PICTURE: MICHAEL COWHEY

NIALL Collins has been asked to stand down from the Fianna Fail front bench for his role in the controversy which saw him vote on behalf of party colleague Timmy Dooley.

This Sunday lunchtime, it has emerged that party leader Micheal Martin has asked Mr Collins, and Mr Dooley to temporarily resign from the front-bench.

Mr Martin said the duo had accepted this decision.

It comes after Mr Collins admitted to voting in place of his colleague six times, mistakenly thinking he was away from the Dail chamber.

1:29pm in the Dáil last Thursday. Timmy Dooley is on his way out of the chamber but spots Niall Collins and has a quick word.

He points to a nearby armrest. TDs who sit in the front row, like Dooley, have electronic voting buttons in the armrests.

The move from the party leader comes after his deputy, Dara Calleary described as "unusual" an admission by his party colleague Timmy Dooley that he was absent from the Dáil chamber when his vote was recorded.

Ceann Comhairle Seán Ó Fearghaíl has already ordered a report into the matter, while Limerick Sinn Fein TD Maurice Quinlivan has called for an investigation by the Dail privileges committee.

Speaking to the Limerick Leader this Sunday lunchtime, he called for Deputies Collins and Dooley, as well as Willie O'Dea, who was filmed in conversation with the pair having a chat to make "a statement as quickly as possible".

"From my understanding, there were three people involved in the conversation [before Mr Dooley left the chamber] and all three of them need to clarify what was said. Video evidence clearly showed that. All three of them need to come forward," he said, "It is an issue of huge concern. If something like this it not addressed properly, I think it damages all of us. I know in other countries it would simply not be tolerated."

Mr Quinlivan confirmed he would be writing to the Ceann Comhairle first thing tomorrow morning to urge him to publish his report into the findings as quickly as possible. There is a crisis of confidence over their voting records now. Has it happened before? All three of them need to come forward with an explanation of what exactly was said."

There has also been criticism from Fine Gael, with Health Minister Simon Harris describing it as a “serious matter”.

Mr Harris characterised the pair’s explanations to date as "dog ate my homework territory" and said both TDs "should make statements on Tuesday and answer the questions".