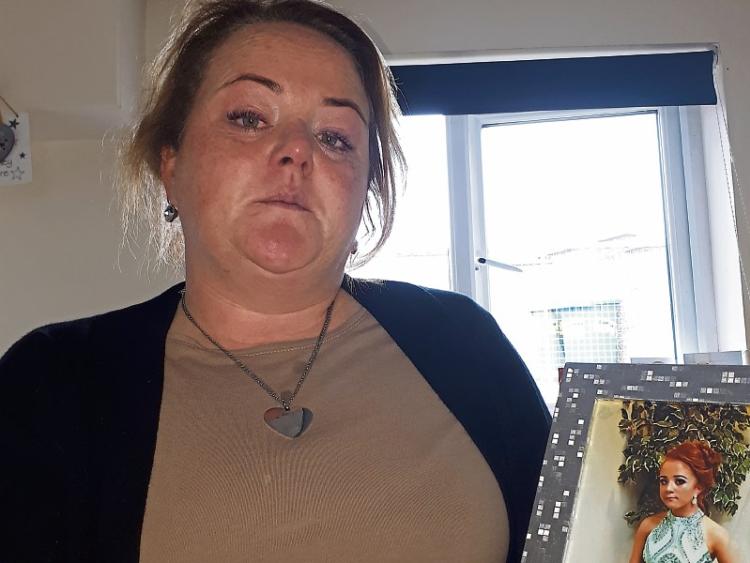 Mary Sheehan with a picture of her late daughter Kayleigh

A GRIEVING southside mum, who lost her only daughter after an attempted suicide, has called for stronger penalties for people who bully.

Mary Sheehan from Southill is “heartbroken" after her “red haired queen” Kayleigh Ryan-Sheehan died aged just 14, after a horrific campaign of bullying from her peers.

She described her daughter as an “angel”, and attacked those who abused her as “vermin” saying she hopes they “rot in hell”.

“Kayleigh was a lovely child. She was very bubbly. She had a great sense about her. She was more like an old soul. It’s still so hard,” her mother said.

“I’ve got nothing left. My whole routine is gone. I lived for her. I don’t see a purpose sometimes. But I will stand and fight until I take my last breath so I can get justice for my child. If I can help another little child and let them see that you can come, and there are people to talk to, I will. Don’t let these bullies take your life,” Mary told the Limerick Leader.

She said her only daughter – who dreamt of following in the footsteps of pro-wrestler Becky Lynch – was being “bullied by members of her own community”.

”The people who do this don’t understand the impact they leave behind on families. I miss her so much,” Mary sobbed.

“These people need to understand that it’s not okay to be bullying children. Making fake [internet] pages and torturing them so much that they can’t bear it anymore, that they end their lives,” she said.

She wants to work with the council and government to get a law in place so people who do this can be prosecuted.

“Everyone in my community loved Kayleigh and knew what kind of a child she was. She wouldn’t hurt a fly. We were so close and we did everything together.”

Read also: Girl lost to suicide named bullies who victimised her in letter to devastated family

Struggling to hold back the tears, Mary added: “I gave birth to my child and I reared her so well. I gave her everything she wanted. For people to bully her, to make her feel she was ugly and lose her self-confidence. But she’s not: she’s beautiful, my red-haired queen, my princess, my baby. And these vermin robbed me of that. Robbed her of her dreams.”

Kayleigh made an attempt on her life while on holiday with extended family in Clonmel and later died in Temple Street Children’s Hospital.

“Kayleigh did not choose to do this. She just couldn’t take it any more. There is always people that will speak to you. You can come, you can speak to me. I’ll get ye help, find ye support,” her mother pledged.

Mary spoke to the Limerick Leader on her birthday, a day she and Kayleigh would normally go out for a meal, or shopping together.

“I’ve no routine left. My routine is my baby coming home on the 303 bus, me waiting for her. She would play her music. The house is dead – I’m dead inside,” she cried.

“Kayleigh was a real angel. She always put everybody before herself. She helped everyone. She had a heart of gold.”

Asked if she had a message for the bullies, Mary added: “I hope they rot in hell for what they did to me and Kayleigh. The pain and suffering bullies cause families. They are pure, genuine evil. How can you be so evil? These people, they laugh into your face. They get  a kick out of it. I think they are mentally disturbed themselves.”

If you need support or if you have been bereaved through suicide and wish to access supports, contact the Office for Suicide Prevention at 061-461262 and they will help navigate services with you. Alternatively, contact the Samaritans at 116123. Services are free and confidential.