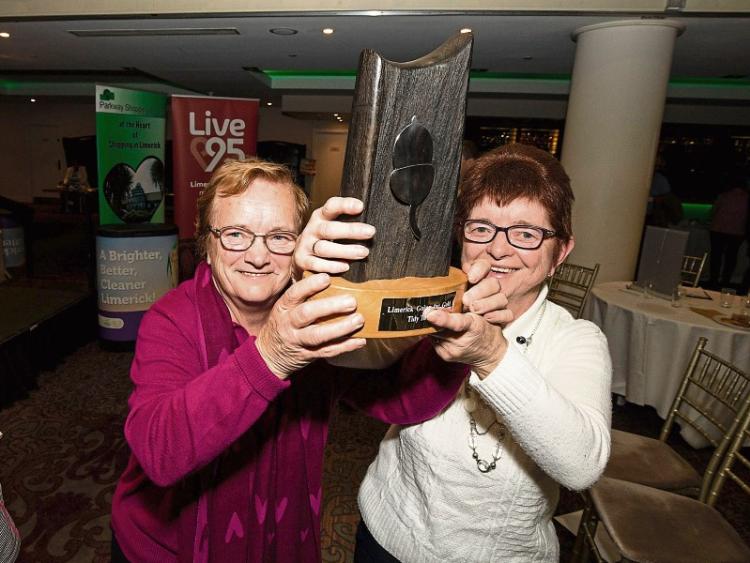 A SMALL south Limerick village celebrated a big win as they were nominated as this years Going for Gold Tidy Town’s champions.

Ardpatrick Tidy Towns committee walked away from the Strand Hotel a hefty €10,000 richer on Tuesday night, October 8 at the annual awards.

Fresh from their Bronze Medal in the National Tidy Towns last week, the party continued for Ardpatrick, beating 10 other communities to the title.

“To win €10,000, for a tiny village, here in Limerick this evening, is brilliant,” said Ardpatrick Tidy Towns chairman Pat Casey.

“We always took home a prize out of here, but we didn’t expect to take home the big one tonight,” he chuckled.

“As the competition came to a close and our name wasn’t coming through for other prizes, I felt good - I felt good all day,” he added, “I had a kind of feeling, I don’t know where the inner confidence came from.”

Despite being one of the smallest villages to compete, Ardpatrick has steadily made a name for themselves in the competition.

“We’re second in the county for national Tidy Towns, and we have seven bronze medals,” Pat continued, “and the council are always good to us and we like to do what we’re told and take advice, we listen to what they say.”

“We’re only a small village but there’s great support from all ages, even for the clean up on Good Friday we got over 40 people helping out - and sure the village only has around 44 people in it!” he laughed.

“That’s the wonderful thing about this competition - size isn’t a barrier and the way they think things out is just brilliant.

As for what will be done with the prize money, Pat says the decision will be “pretty serious.”

“We were afraid to talk about it until now, it’s an awful lot of money,” he said, “we’ll probably involve the school in an environmental project, and there was a racehorse named Ardpatrick that won an English darby years back and it would be nice to remember that in some way - it was a famous win, that’s only my own thinking.

“We’ve plenty of small projects that need funding of course, we’ll have to sit down and talk this out.”

The competition which is sponsored by the JP McManus Charitable Foundation had  a total prize pool of €70,000, with more than 120 groups having battled it out for a share of the prize money in recent months.

It is organised by Limerick City and County Council and supported by Live 95, The Limerick Leader and The Limerick Post, Parkway Shopping Centre, I Love Limerick and Southern Marketing Media & Design.

Five of the finalists in the Tidy Towns Category were selected by popular vote on the Limerick Today show on Live95 with the remaining areas chosen by the judges, Richard Barry (Tidy Towns Chair Tallanstown, Co Louth) and Michael Griffin (retired, Limerick City and County Council).

Prizes were also awarded in seven other Going for Gold categories at the awards ceremony, which was attended by hundreds of people from communities across Limerick city and county.

Speaking to the attendees, Mayor Michael Sheahan said: ““As a public representative, I am privileged to meet with voluntary groups on a daily basis and I understand and appreciate the hard work you are doing to enhance your areas. Nurturing community spirit and fostering civic pride are the raison d’être of Limerick Going for Gold.”

Gerry Boland from the JP McManus Charitable Foundation said: “I would like to congratulate everyone involved in the whole campaign again this year. The JP McManus Charitable Foundation is committed to continuing to assist Limerick communities to reduce the impact of litter across Limerick city and county. I would like to thank you all again for your continuing participation and for the enormous contributions which you make to the well-being of the communities in which we all live.”