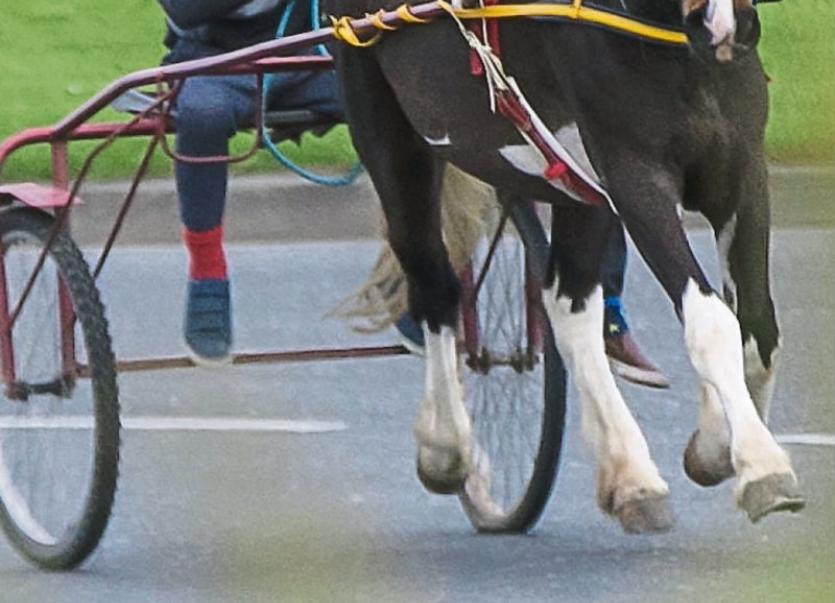 A COUNCILLOR has called on gardai to rein in children as young as six riding sulkies in a County Limerick town which, he says, is turning into the “Wild West”.

Cllr PJ Carey said sulkies are being ridden up and down Kilmallock’s Main Street, horses are tied up in green areas and allowed to roam in the town’s People’s Park, which is covered in equine faeces.

“It is a big problem. I have seen national school children as young as six and seven in sulkies. They are tiny little guys sitting behind Shetland ponies. It is going on seven days a week in Kilmallock. It is dangerous and it is illegal.

“They are getting more and more emboldened because there is no enforcement,” said Cllr Carey, who raised the matter at a Joint Policing Sub-Committee meeting of the Cappamore-Kilmallock municipal district.

“One day I was driving up town. There was a young lad, probably 12 or 13, on a bike pulling a fair big, powerful pony with a rope. I don’t know how many laws he was breaking. Traffic was held up. A squad car passed by and kept driving,” said Cllr Carey.

He said there is a lot of legislation and quoted from the Control of Horses Act 1996.

“It states that all horses must be microchipped and have official identification documents. Horses on a public road must be fitted with a bridle, be under the control of someone over the age of 16 and must have a licence.

“The county council must ensure the owner, who must be over the age of 16, is fit to keep the horse before issuing the licence. It is illegal to have a horse tied up. It is also illegal to allow a horse to graze or remain in a public place without consent from the council,” said Cllr Carey.

Superintendent John Ryan, who has recently been appointed as head of the Bruff district, said he has some experience in the area.

“It is not as straightforward as you imagine. We have to work with the council or Department of Agriculture.

“The big difficulty is getting horses taken away - there is a huge cost factor. We will certainly put something in place if you will send me the details,” said Supt Ryan.

Cllr Mike Donegan said the problem of horses in public areas in Kilmallock is “ongoing”.

Last year, he highlighted Deebert Close where horses were being put on the estate’s green area.

"What happens if a horse in one of these sulkies being driven by a child or a teenager kicks a car? Who pays for the damage?

"People get jailed for driving without insurance but kids are out on sulkies without a care in the world while the rest of us have to pay motor tax, insurance, NCT etc Gardai need to enforce the laws of the land," said Cllr Carey.

Martin Collins, of Pavee Point, gave his opinion on children riding sulkies in Kilmallock to the Leader.

“I am not really familiar with the local context but just at a general level I would say if this is practiced in a safe and responsible manner then I honestly don’t see what the issue is. It could actually be a deterrent as well.

“I mean if these young children didn’t have their ponies and their sulkies then God knows what other sort of anti-social behaviour they might get involved in in a few years time such as crime or drug addiction and then, of course, you have mental health issues.

“It could potentially be a very positive healthy hobby,” said Mr Collins.