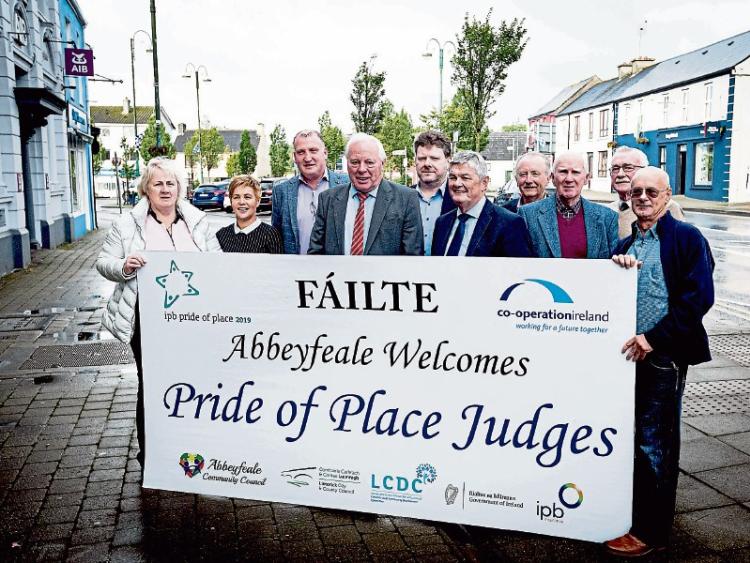 IT was their opportunity to showcase their town and Abbeyfeale and its people were determined to do just that.

Last Wednesday, the judges in this year’s Pride of Place arrived into  Abbeyfeale to find a town ready to roll out their vision of community.  And as the story of Abbeyfeale as community unfolded, it became clear even to those telling it, that Abbeyfeale was a happening place and  so much had been done to enhance the town as a place to live a rich life, to learn, to thrive and to take pride.

Maurice O’Connell, the chairman of Abbeyfeale Community Council who co-ordinated the visit, acknowledged they had laid on a very busy schedule.

“The judges interacted with over 25 different groups in six different locations,” he said.

The huge efforts made by the different groups to highlight and feature their activities were hugely impressive, Mr O’Connell said. “We couldn’t have asked for more. There was a great buzz in the town and there was a great feel-good factor.”

The old stalwarts of community and the new shoots were all in the mix and the list of achievements was long: the Town Park; the Christmas Lights; the Fleadh by the Feale and St Patrick’s Day Parade; the Heritage Trail; the Community Garden and Men’s Shed; the Glórach Theatre and the Further Education College.

The emergence of Abbeyfeale as having the largest sign language group in the country was celebrated, along with other groups such as the Drama Group, the Writing Group, the Knitting Group and the Arts and Crafts Group. And the contribution of the many sporting organisations was also reflected in the presentations.

There was the unusual also such as the hundreds of water butts acquired for water conservation  and the town’s new dedicated Biodiversity Space.

Awards won along the way were listed with pride, along with future plans such as the project to develop the e-hub at the centre of the town in collaboration with Innovate Limerick.

“There is an awful lot going on here,” one of the judges Tim Caffrey remarked, adding that collaboration was key and hugely important. “It is very evident to me that is the key to your success.”

The website, Mr O’Connell explained, was developed with funds under the Town and Village Renewal Scheme.

Billed as Abbeyfeale, gateway to the beautiful South-West, the well-laid out sections guide locals and visitors to all they need or want to know about the town, its history, amenities and attractions. It also contains a What’s On feature and is now live.

Abbeyfeale was entered in the population 2,000-5,000 category and the results of this year’s competition, the 17th,  will be announced on November 30 at an award ceremony in Kilkenny.

IPB Pride of Place is an all-island competition, supported by Co-Operation Ireland and local authorities North and  South.