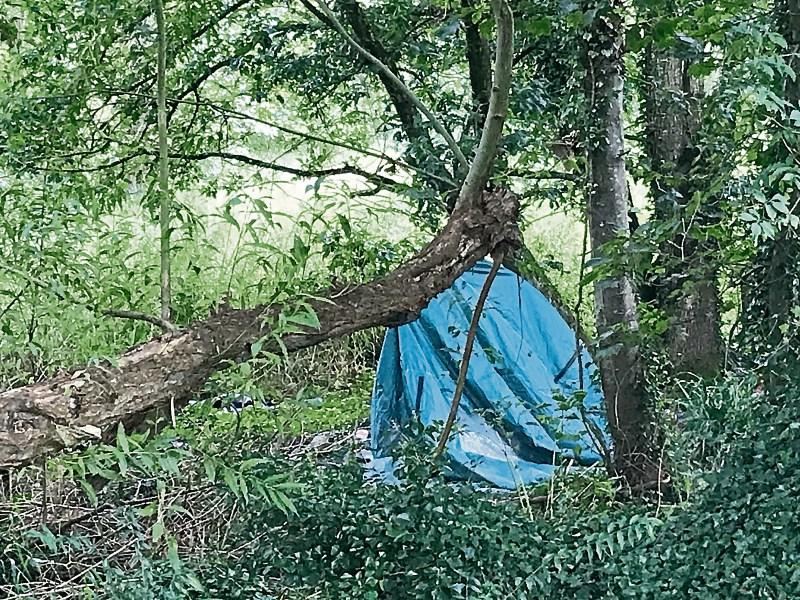 Homeless charity Novas has pledged to investigate the situation

A HOMELESS ‘family´ is living in a tent beside one of the city’s most affluent areas.

A makeshift tent has been set up in grassland at the Westfields wetlands, a stone’s throw from the North Circular Road.

It’s providing shelter for the people who cannot find an alternative place to sleep.  The situation has been described as “awful” by homelessness charity Novas, which has pledged an investigation, while local councillor Brian Leddin has called for a “multi-layered” approach to the homelessness crisis.

Residents in the area said that at one stage there were three tents, but when the Limerick Leader called there was just one tent, with litter and bottles strewn around the site.

Residents said a family were living in the tents, but this could not be confirmed when we called out to the site this week.

The fabric tent was being supported by the trees, which were no doubt providing their own shelter.

Policy boss at Novas Dr Una Burns said: “It’s really awful. I think the amount of tents [being used for homeless shelters] has increased by 40% across the country. In many respects, it’s a microcosm, and it’s reflective of the bigger issues around the country.”

“Figures released by [Housing Minister] Eoghan Murphy demonstrate the number of people who are homeless continues to increase. The policies implemented by government, as well intentioned as they are, don’t seem to be preventing people from becoming homeless, or moving people on at the rate they should,” Dr Burns added, “It’s a very worrying trend.”

Cllr Leddin said: “Someone who finds themselves living in a tent is obviously in a very bad situation and we know that a lot of homelessness can lead to mental health issues. It’s obviously very sad.”

“Homelessness is a complex issue and there needs to be a multi-layered approach to it,” he added.

Earlier this year, the Leader highlighted a couple living in one of the basements of O’Connell Street.