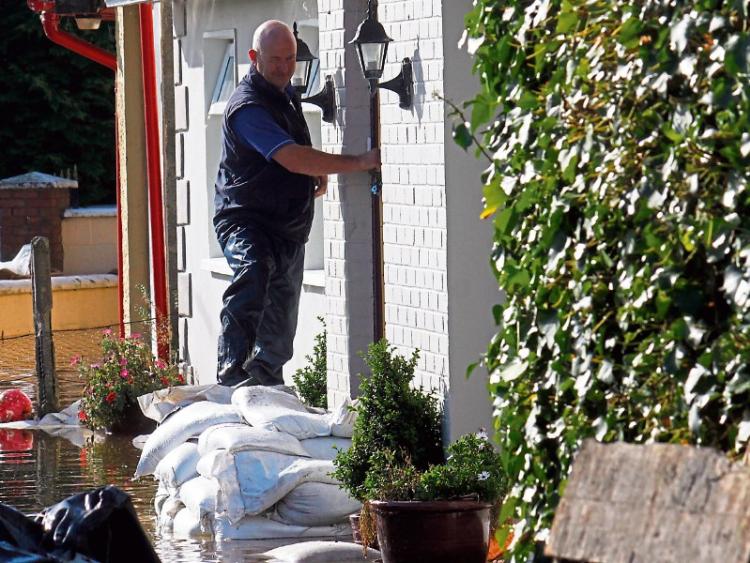 Liam Maxwell assessing the damage to his home. His family, who were forced to leave their home at the weekend, had spent €120,000 on repairs after damage in a previous flood in 2011

A FAMILY who spent eight years in a mobile home after their residence was flooded in 2011, watched on in disbelief at the weekend when a deluge of water swamped their revamped home.

Despite tireless efforts to prevent flood water from entering his house, Liam Maxwell’s family watched in terror as water began to quickly seep through the sandbags at the front door and sweep into their home in Coonagh on Saturday night.

Within hours of the highest tide of the year at 8.05pm, the Maxwell’s garden, on this cul-de-sac of fives homes, was completely submerged. And all matters were compounded after another high tide the following morning.

Emergency services were already on high alert on Saturday morning when signs of severe flooding were on the horizon, after rumours circulated that a sluice outfall had been damaged.

This rumour turned out to be true, and the Office of Public Works has admitted fault, more than 24 hours after five families had to be removed from the cul-de-sac by rescue boat.

The families have been forced to evacuate from their homes for health and safety reasons, and there are fears that they will have to spend Christmas elsewhere as significant repair works have to be carried out.

And in a statement to the Limerick Leader, the OPW has confirmed that it will “provide financial assistance to meet, in full, the associated reasonable costs of them returning to their home and restoring their home to its pre-existing state”.

But despite the promise of compensation, the Maxwell family remain devastated as this will be the second time they will have to rebuild their precious home.

Up until recently, Liam, his wife Pauline and their children Jean and Katelyn, had been living out of a mobile home in the back garden due to the same house being flooded in 2011. It cost them €120,000 to bring their home back to its former glory.

“Every penny we saved, when we had a couple of thousand together, we did a bit of work to the house.

“We were in a mobile home for eight years, at the back of the house. I was sleeping on a couch. It was terrible, to see water coming back in your driveway. Most of the houses in Coonagh can’t get insurance because you’re lying on a flood plain.”

The OPW has confirmed that it has appointed an independent loss adjuster, and it has made contact with the five homeowners so that an assessment can be made.

“The OPW has assured the homeowners that it is committed to working in co-operation with them so they can quickly and safety return to their house and their house can be restored to its pre-flooding position,” a spokesperson said this Wednesday.

But a total value of the damage caused has yet to be confirmed, though it’s likely to exceed €1m, including the flood damage at Na Piarsaigh GAA pitch.

On Monday evening, the OPW admitted fault after it confirmed that a “temporary structure”, put in place after the collapse of a sluice outfall, failed and led to the flooding.

This structure was made from “earthen material”. The OPW states that this typically used in such circumstances. “In this particular instance, the matter of a broken sluice door complicated the situation,” a spokesperson said on Wednesday.

The Maxwell family revisited the house this week after the water subsided. However, he said that there is a lot of damage at the home.

“The water has subsided inside the house. It’s still in the yard and the front. It’s only a matter of getting people in to assess the damage. There is a lot of damage in my house. The watermark is up to nearly 18 inches to two feet, and that’s all dry lines. That all has to come down. Skirtings, doors, kitchens, they are all destroyed,” Liam told the Leader this week.

Independent assessors have already some of the homes, and it has been indicated that it will take six weeks for the homes to dry before proper repair works can be carried out.

Liam has said that he will need to take out a bank loan, as much work will need to be done before he is compensated by the OPW.

“Boxer Moran made a commitment to my wife that he was going to look after our house, and we are going to have to take him at his word. Hopefully they will come through with a payment and make a start.”

During a visit to their home, Minister Kevin “Boxer” Moran met with the Maxwell family. The Leader asked the Minister if there will be any repercussions for those who caused the flooding, to which he replied: “All that I will say to you is, I will look for a briefing of what happened, if something happened here on Friday, I want to know about it.” Senator Kieran O’Donnell said: “I have spoken to Minister Boxer Moran and the OPW at length, and it’s important that there’s no cost, in anyway, that the residents or anyone affected by flooding; the club Na Piarsaigh or the Flying Club or farmers, that they would be in any way impacted.”