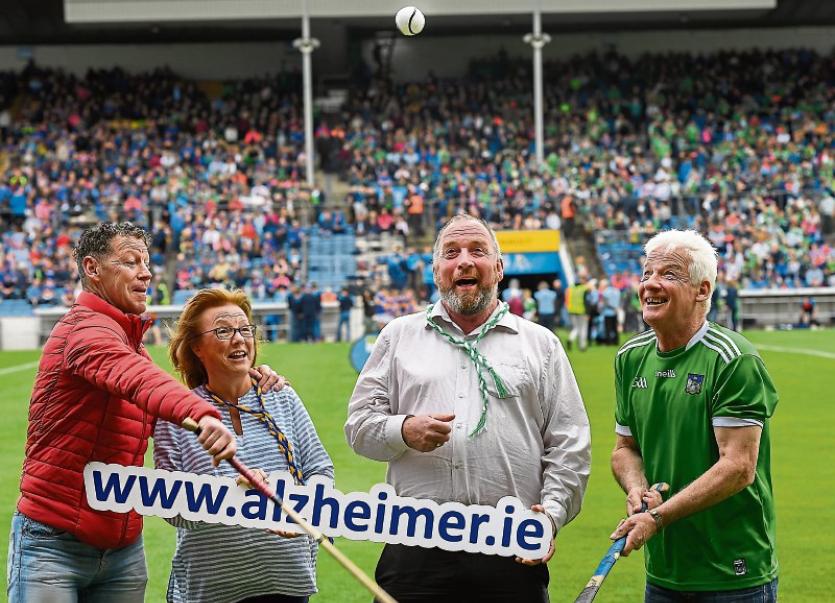 Pictured at the launch of the Tipperary v Limerick Legends were Ciaran Carey, Kathy Ryan, Kevin Quaid and Gerry Quaid

Limerick and Tipperary have all of hurling’s major trophies in safe keeping for the year and this Saturday some more ash will clash between the two counties.

It’s all in good fun on this occasion, however, and for a great cause too, with The Alzheimer Society of Ireland hosting a fundraising match between ‘legends’ of the two counties.

The game throws in at Nenagh Éire Óg grounds at 5pm this Saturday and will feature the likes of Joe Quaid, Ciaran Carey, T J Ryan, Mike Nash and Gary Kirby on the Limerick side.

Facing them in the blue and gold will be stars of the past like Brendan Cummins, Michael Ryan, Michael Cleary and Declan O’Meara and this year’s All-Ireland-winning coach Liam Sheedy.

This unique fundraising initiative was the brainchild of two leading Munster dementia advocates, Kevin Quaid and Kathy Ryan, who both have a dementia diagnosis.

All the money raised going towards providing community services and advocacy supports in the Munster area and beyond.

Prominent GAA journalist Damien Lawlor has been confirmed for match commentary, Paul Collins is MC and the Liam MacCarthy Cup will also be present on the day.

Tickets for the event cost €15 for adults, while kids go free. They can be booked here through Eventbrite or purchased on the day.