Floral artist is star performer in the horticulture at Limerick Show 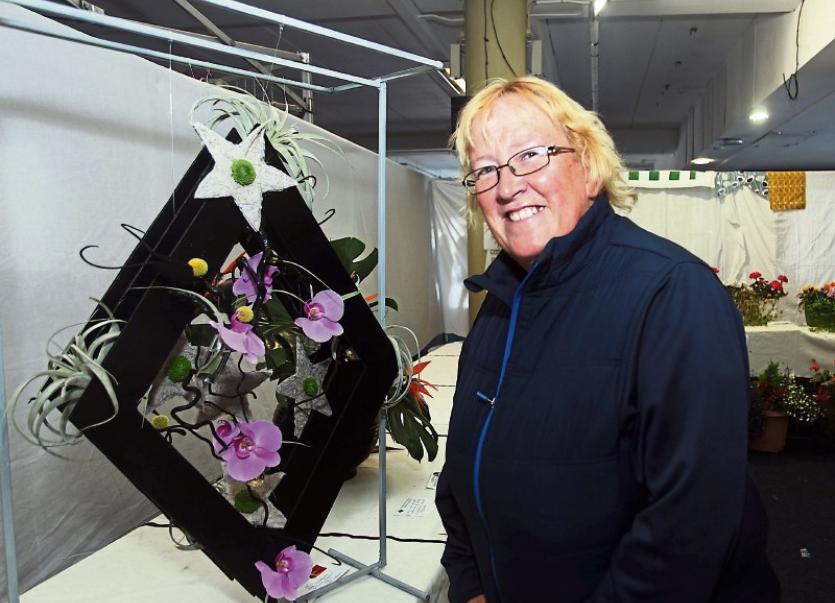 KATHLEEN Barrett has taken part in Chelsea Flower Show, won prizes in Bloom and the Floral Art and Design show in London and is heading to the World Flower Show in India next year but winning at her own show is still special.

The lady from Knocknagorna, Athea, won best in show at Limerick Show. A big part of her success was this stunning exhibit, pictured. The theme was Star Performers and Kathleen shot for the stars.

“It is supposed to be a contemporary exhibit so contemporary means less flowers – it is almost like abstract painting. The first thing you have to do is nail the title so I have the stars (made from material). These are air plants, they don’t require any roots, they are brought in from the tropics,” explained Kathleen. The exotic purples flowers that bring it to life are paphiopedlium orchids. Despite going to many shows in Ireland and now worldwide there is something about Limerick Show.

“It is nice to be best in show and recognised in your own county,” said Kathleen. Her work was part of a magnificent display in the horticulture section chaired by Geraldine Nicholas and her hard-working committee.

This reporter presumed this summer with the plentiful rain would have been better for growing flowers than the drought of last year but not so. Ennis man Eamonn Murphy said: “This summer was much worse because the wind and rain came at the wrong time.”

Dahlias are Eamonn’s big passion. The former printer with the Clare Champions cleaned up in the dahlia categories with fellow Clare man Harold Herlihy and Limerick man Jimmy Shiels also getting in on the act.

“I also had two entries in the vegetables – parsnips and potatoes. My potatoes came first and second which was a bit of a surprise,” said Eamonn.