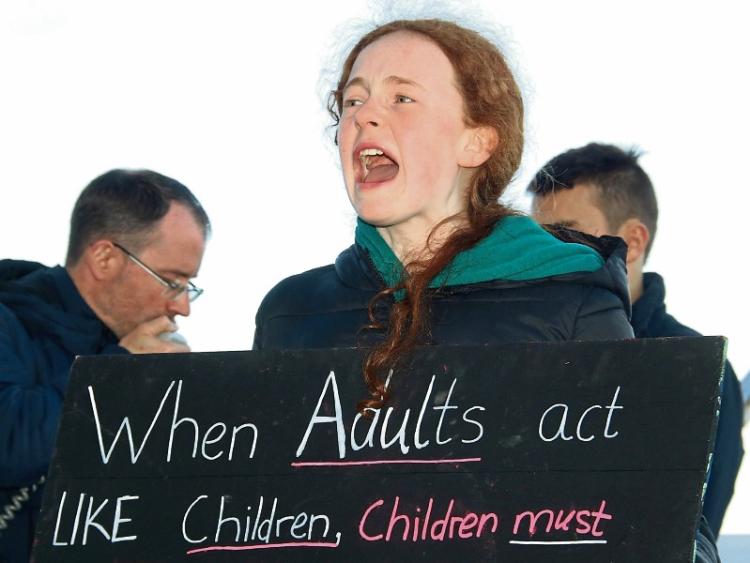 Saoirse Exton: "Strikes are the most effective way of drawing attention and educating the youth on this issue"

LIMERICK climate change activist Saoirse Exton has written to every school in the county asking them to allow students to take part in a protest next month.

Ms Exton, 14, has written to every school principal and board of management chair in advance of a massive demonstration her movement Fridays4Future will take part in on September 20 next.​

It chimes in with the second Global Climate Strike, which will see millions of young people urge reforms to tackle global warming.

More than 400 of Ms Exton’s peers ​demonstrated in Limerick on the last occasion, just before St Patrick’s Day.

In the letter, she writes: “Climate change will directly affect every young person of this generation, including those in your school, yet our government is neglecting to recognise its people’s will and not enough action is being taken globally. Without our governments listening to us, radical, eye-catching action needs to be taken and this is why we strike. Strikes are the most effective way of drawing attention and educating the youth on this issue.”

Ms Exton will continue to strike each Friday outside the Limerick Twenty Thirty building between 1pm and 2pm.​

But the event on Friday, September 20, will kick off from Arthur’s Quay Park and end at 3pm outside City Hall.

“We urgently need you to encourage the students and staff at your school to join in on our strikes, particularly the upcoming one on September 20. We also ask you to work to highlight the issue of the Climate Crisis across your school and encourage participation,” Ms Exton wrote in the letter, co-signed by a huge number of people including former mayor James Collins, plus other elected representatives and local campaigners.

Ms Exton acknowledged it might be a big ask for principals to agree for their students to attend the protest on a Friday lunchtime.

But she added: “This is our future. Our government is being negligent. We have no other option but to protest because they are not listening to us and unfortunately, it is our future, and we need to fight for it.”

It’s so important. We need to get as many people from all over the place, even the county schools. She said at her regular protests, she would like to have at least one person from each city school.