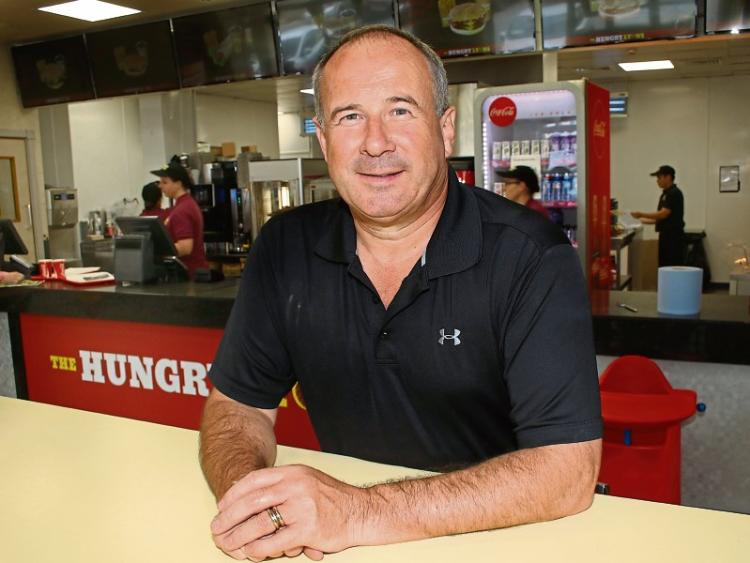 Businessman John Lyons in one of his new outlets

A BUSINESSMAN involved in a high-profile dispute with fast-food giant Supermac’s has dropped the brand from his two franchise restaurants in the city.

John Lyons, who was involved in a High Court case earlier this year with Supermac’s, has cut ties with the popular firm. According to a spokesperson for Supermac's the franchises between both parties have been terminated by mutual agreement.

The Supermac’s signage at Mr Lyons' restaurants at the Ennis Road and Dooradoyle were taken down this week, and were replaced with signs bearing the name the Hungry Lyons. All 75 staff employed at the two restaurants remain in place.

The menu is broadly similar to that served in Supermac’s, which still retains five outlets across the city.

Speaking to the Limerick Leader this week, Mr Lyons, who ran the franchise with his wife Mary said: “I got an opportunity to go alone and took it. I think both parties wanted to go their separate ways. There were a number of well documented issues.”

Mr Lyons is one of the original Supermac’s franchisees since the firm’s infancy more than 30 years ago.

He previously operated branches in Charleville, Shannon and O’Connell Street, before opening at the Ennis Road in the mid-1990s and Dooradoyle opposite University Hospital Limerick in 2004.

“It was a mutual decision between two businessmen to go our separate ways. It suits both parties,” he added.

In a statement, Supermacs confirmed the termination of its franchises at the Ennis Road and Dooradoyle as of close of business on Monday.

Mr Lyons said there are no conditions around the termination.

“I’m a long time in this business. I was involved in a lot of decision making back in the day. We are all in the restaurant game. We all call our burgers burgers. There is no way around it. You can’t call them anything else. There are no restrictions or stipulations,” he confirmed.

He does admit feeling an element of sadness in leaving the Supermac’s brand behind.

“Supermac’s has been part of my life for sure. I have a lot of friendships there, and received a lot of experience out of it.

“I’ve established myself out of it. I’ve no regrets. Myself and Pat McDonagh [Supermac’s founder] were very close back in the day. Things happen in life, but you get on with it,” the businessman added.

More Hungry Lyons branches might pop up in the near future, Mr Lyons said, with talks ongoing with four providers, in a move which could see the number of staff employed grow to 140.

At the heart of the High Court case earlier this year was a proposed refurbishment of the premises at the Ennis Road, with Supermac’s unsuccessfully bidding to secure an injunction preventing Mr Lyons to start refurbishment work.

However, Mr Lyons was able to carry out a €500,000 refurbishment at the landmark restaurant near the Gaelic Grounds, which will re-open to the public this Friday night at Hungry Lyons.

Meanwhile, the Limerick Leader can also reveal this week that the unit next door to the Hungry Lyons, Verona Coffee has been taken over by Hook and Ladder.

The coffee shop, which also has bases in Castletroy, Corbally and Sarsfield Street, took over the premises in St Nessan’s Road this week.

Read also: Limerick hotelier criticises insurance company for paying out despite hotel not being at fault